THE most sustainable office building conceived and constructed to date has recently opened in London.

Designed by British architect Foster + Partners as the London headquarters for financial and media giant Bloomberg, the vast office has pushed the boundaries of sustainable building design.

Spread over a 3.2 acre site, Bloomberg’s £1BN new office building offers 1.1 million square feet of commercial and retail space and brings the company’s 4,000 London-based employees under one roof for the first time. 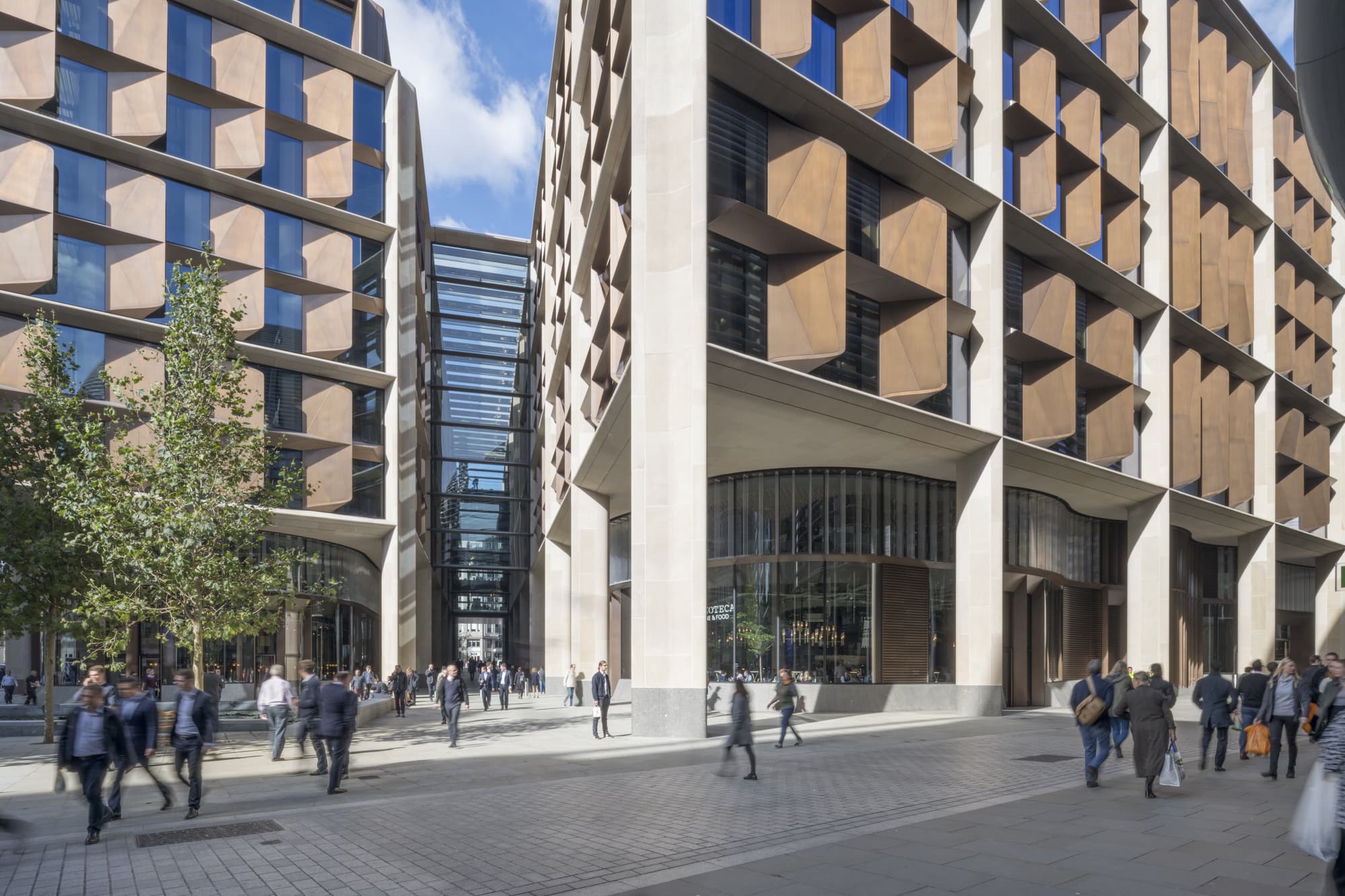 Actually two buildings, the development is made up of a pair of triangular-blocks connected by bridges that span over a pedestrian avenue.

That walkway follows the route of an ancient Roman road that historically ran through the site.

While the building is an undoubtedly impressive addition to the London streetscape, it is the sustainable thinking running throughout the facility that is perhaps even more impressive.

Both the architect, Norman Foster, and the client, Michael Bloomberg, agreed early in the project's gestation that the new headquarters would incorporate the highest standards of sustainable building design.

According to Foster the "project evolved from thereon into a building that is one of the most sustainable in the world." 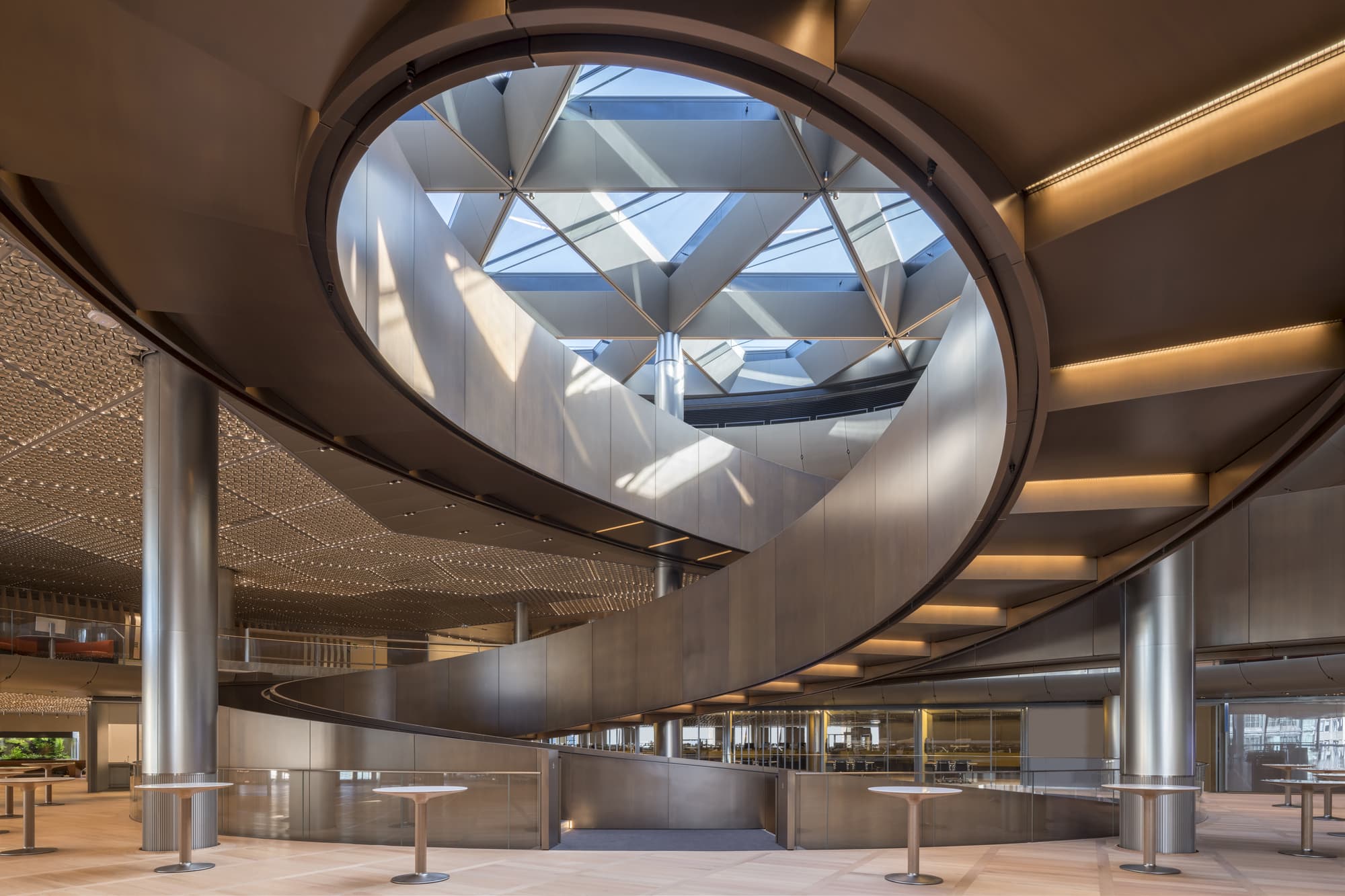 Above: Bloomberg's London HQ is the greenest office building built to date according to BREEAM (image courtesy of Nigel Young).

In fact according to BREEAM - the world’s most widely used method for evaluating and certifying the environmental impact of the built environment - this is the most sustainable commercial building ever built.

BREEAM gave the building an "Outstanding" rating, scoring it at 98.5% against its criteria; the highest design-stage BREEAM score ever achieved by a major office development.

The building’s distinctive bronze blades serve two purposes. Firstly, to shade the floor-to-ceiling glazing, and secondly, as an integral part of the natural ventilation system. 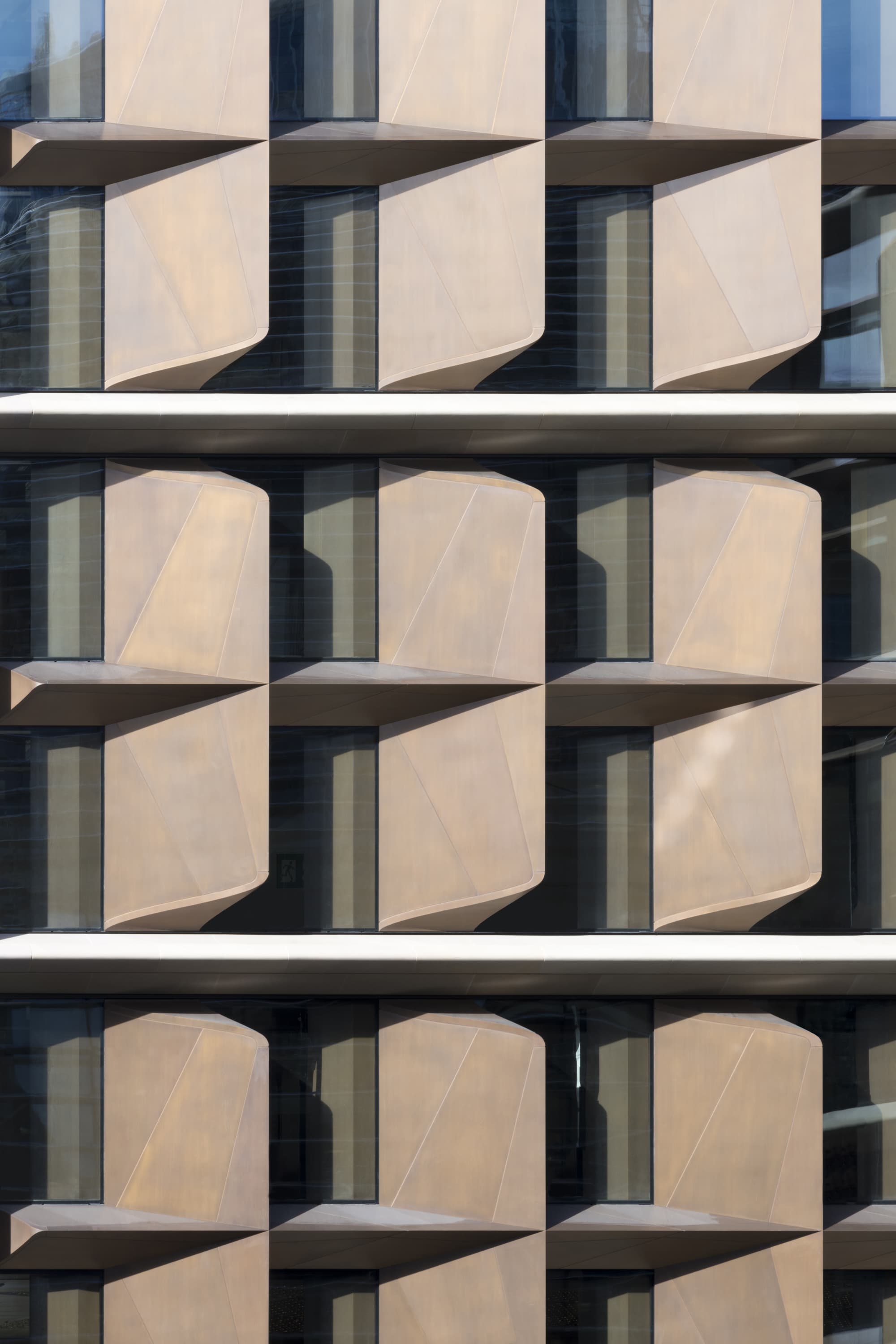 Above: The building’s distinctive bronze blades provide shading and are part of the natural ventilation system (image courtesy of Nigel Young).

Vents in the fins can be opened and closed according to the weather, pulling air through the office spaces into the atrium and out of the roof in form of “stack” system.

Smart sensors can then adjust airflow, with the system expected to reduce CO2 emissions by up to 300 tonnes a year.

Lighting is provided by some 500,000 LEDs that use around 40% less energy than traditional lighting.

These LEDs are contained within integrated ceiling panels that also combine heating, cooling and acoustics into an elegant and innovative petal leaf design. 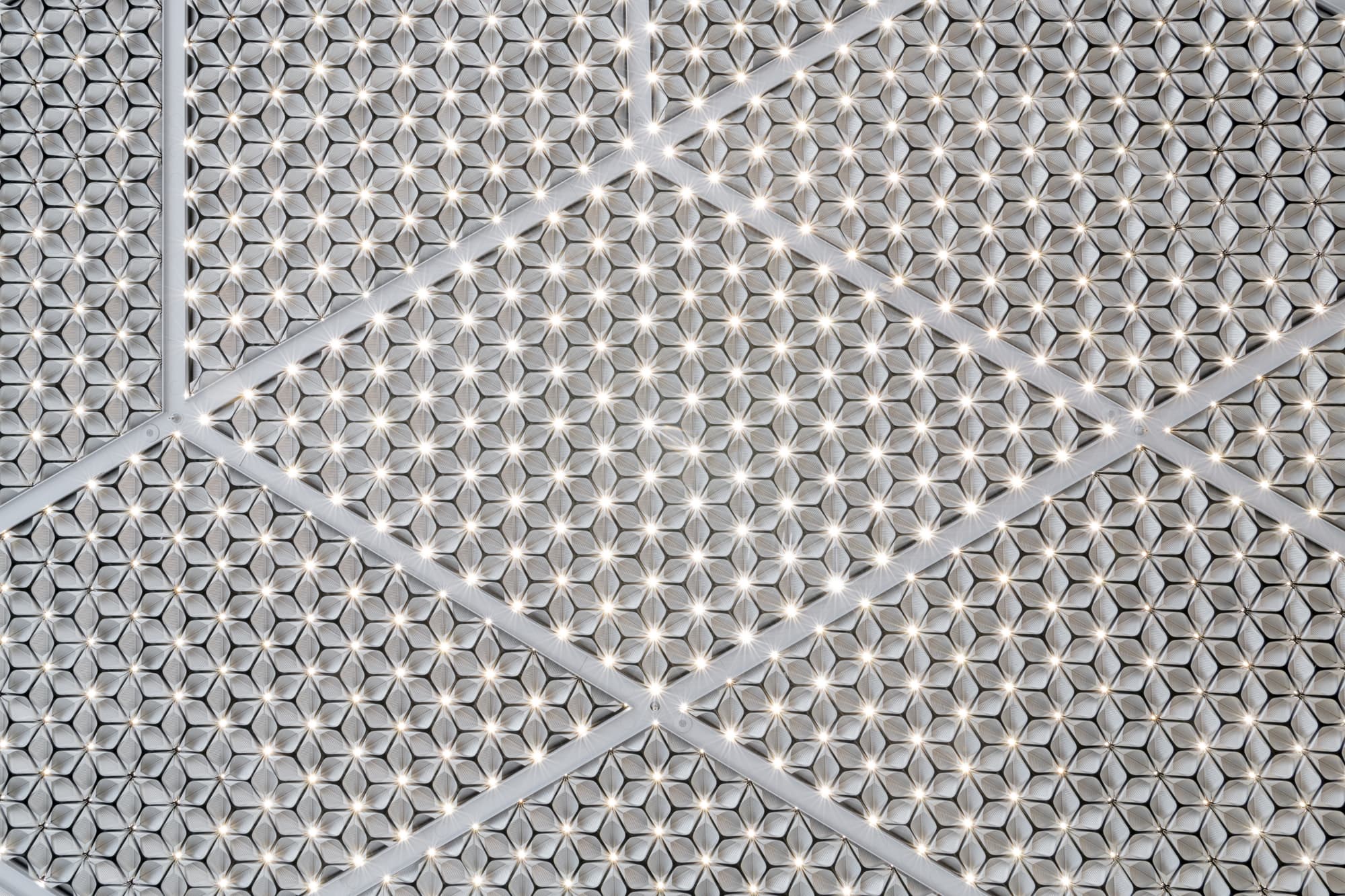 Above: The building's 500,000 LEDs are arranged in an innovative petal leaf design (image courtesy of Nigel Young).

Unusually, the Bloomberg building has its own power generation plant on site, generating electricity from natural gas.

As the company are generating power themselves, they "own" the waste heat created. That waste is set to be used to heat the building during winter, while in the summer it will drive an absorption chiller to circulate chilled water around the facility.

Bloomberg expect to see a 73% reduction in water consumption as compared to a typical office building.

Rainwater harvested from the roof, cooling tower blow-off water, and water from grey water sources such as the sinks and showers will treated and recycled to serve vacuum flush toilets. These toilets, similar to those found on airplanes, will use about a quarter of the water of a regular toilet. 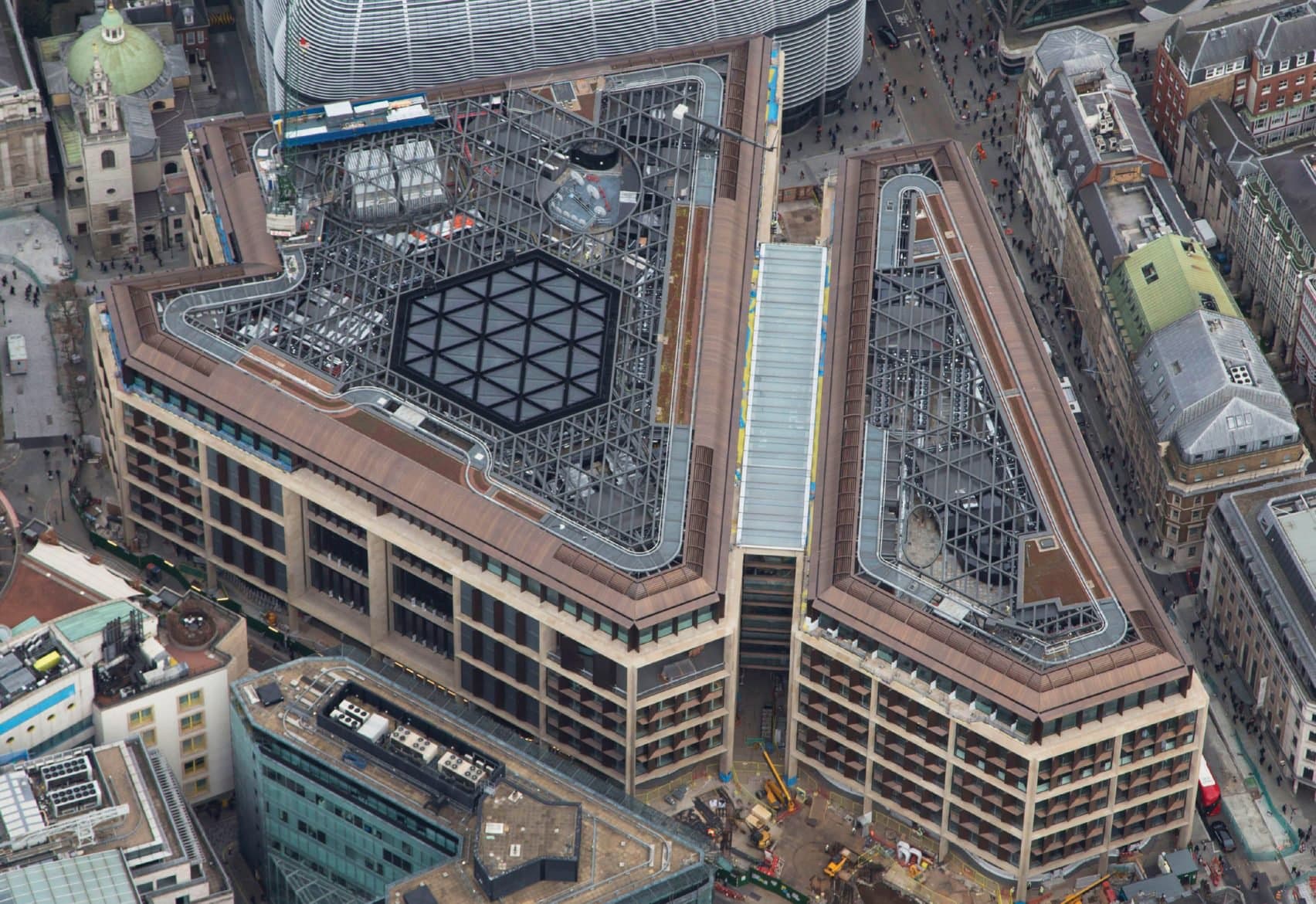 Above: The building's water conservation systems is expected to save 25 million litres of water each year (image courtesy of Bloomberg).

These features, along with many others, have led to the creation of the world’s most sustainable office building to date, and designers hope that many of the innovative systems employed on this project will become standard practice on other offices in the future.

Images courtesy of Foster + Partners, Bloomberg, Aaron Hargreaves and Rudwall. We welcome you sharing our content to inspire others, but please be nice and play by our rules.