THE spectacular Louvre Abu Dhabi is the first major building to be constructed in what is one of the most ambitious cultural masterplan’s ever undertaken.

The first international outpost of the famous French museum, the Louvre is set to become one of the cornerstones of Abu Dhabi's new district. As part of the Emirate’s long term strategic plan to attract tourists and diversify its local economy, Abu Dhabi is spending USD $27BN creating an "international cultural destination". 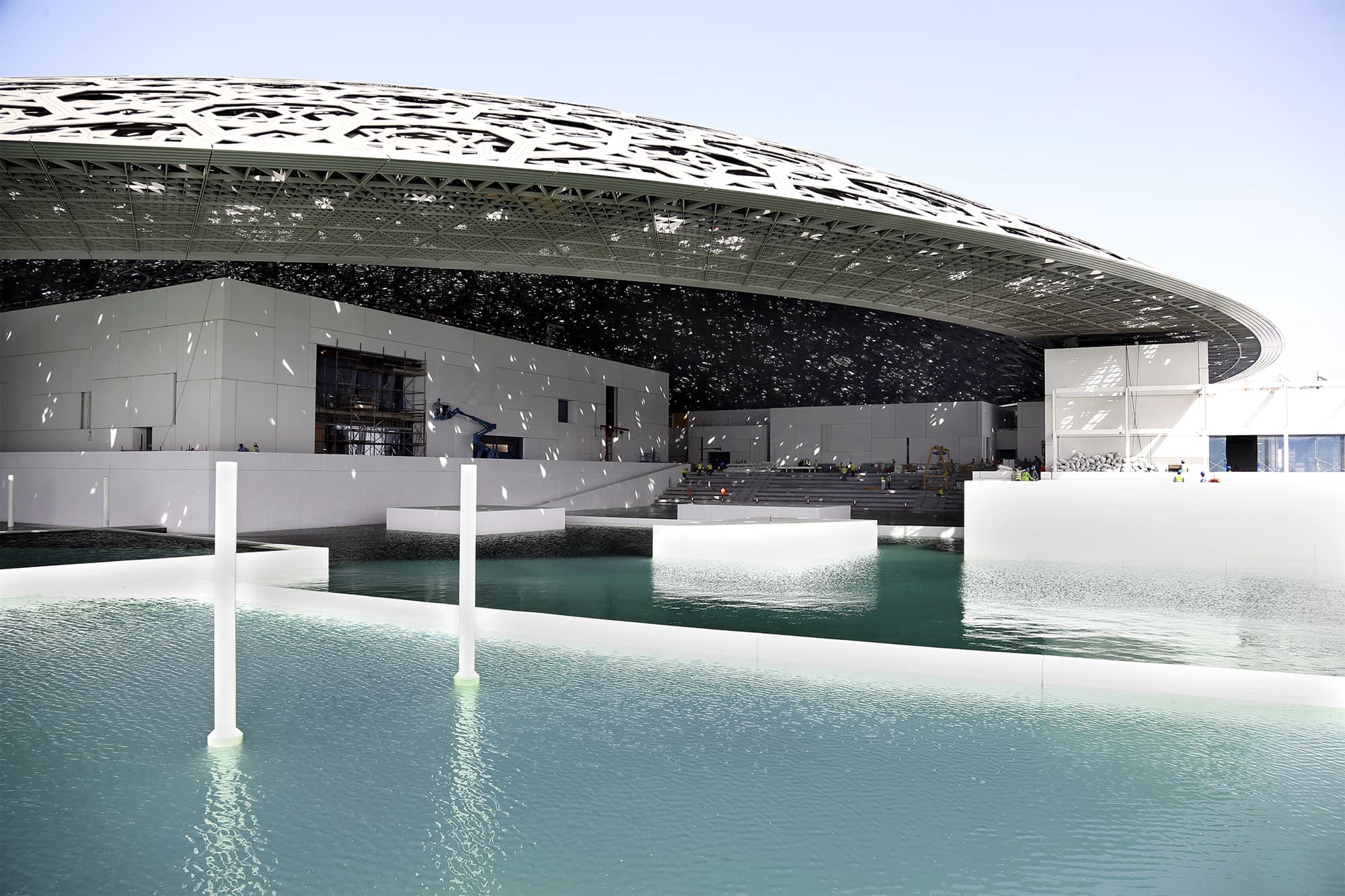 Above: The Louvre Abu Dhabi will be the cornerstone of a new cultural district (image courtesy of TDIC).

The district will bring together some of the biggest names in architecture including five Pritzker Prize winners.

The Louvre Abu Dhabi - designed by French architect Jean Nouvel - will be closely followed by an outpost of the Guggenheim designed by Frank Ghery, which is currently under construction along the coast; the National Museum of the UAE, designed by British architect Norman Foster, which will tell the story of the country’s founder; a futuristic performing arts center designed by the late Zaha Hadid; and a maritime museum, that will celebrate the country’s connection with the sea, designed by Japanese architect Tadao Ando. 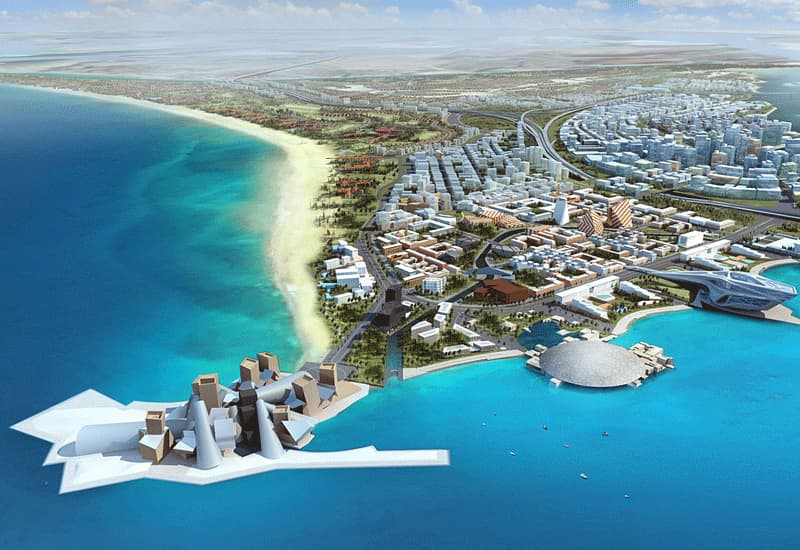 Above: The development of Saadiyat Island will include buildings designed by Frank Ghery, Norman Foster, Zaha Hadid and Tadao Ando ( image courtesy of TDIC).

Originally announced in 2007, the Middle eastern Louvre museum has been eagerly anticipated for over decade and does not disappoint. Extending out into the Persian Gulf the USD $650M museum’s key architectural feature is its impressive and intricate dome that seemingly floats above the water.

Based on a structural concept by engineer Büro Happold, the vast dome has a span of 590 feet (or 180 metres) and a 1,850 foot (or 565 metre) circumference. Blurring art and engineering, the dome is perforated to create an internal effect that its architect describes as a “rain of light”. 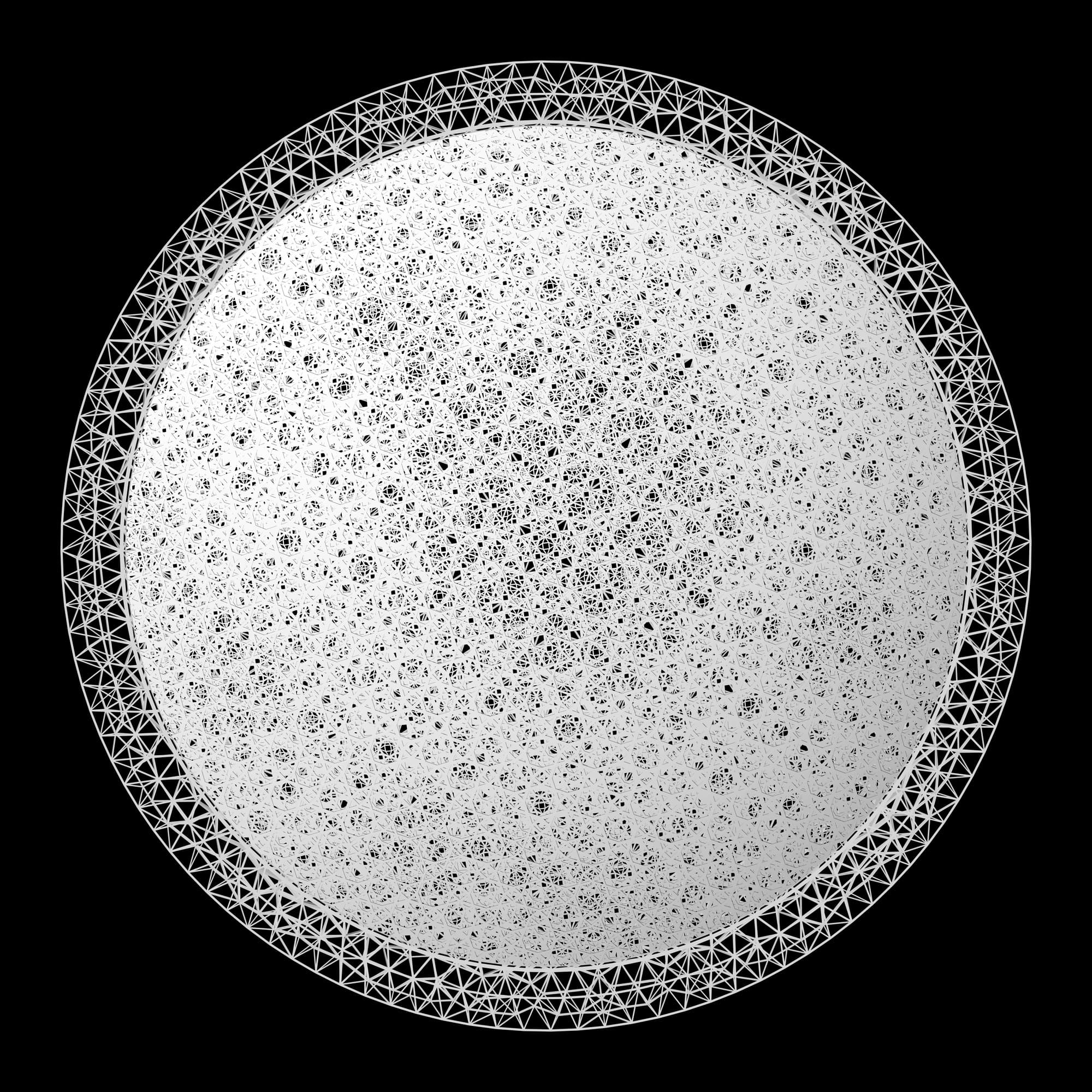 Above: The museum’s key architectural feature is its impressive and intricate dome (image courtesy of Büro Happold).

Despite its simple geometry the vast dome is an extremely complex structure, constructed from more than 400,000 individual elements. Weighing 12,000 tonnes – almost as much as the Eiffel Tower – the dome’s structure is a steel space frame that rests on just four supports.

To construct the dome, 85 super-sized steel elements each weighing between 50 and 70 tonnes, were craned into place, supported by nearly 120 temporary towers. These elements were then joined together with steel connectors. Once the structure was complete, the whole dome was lifted off the temporary towers and lowered 15 inches down onto the four permanent piers. 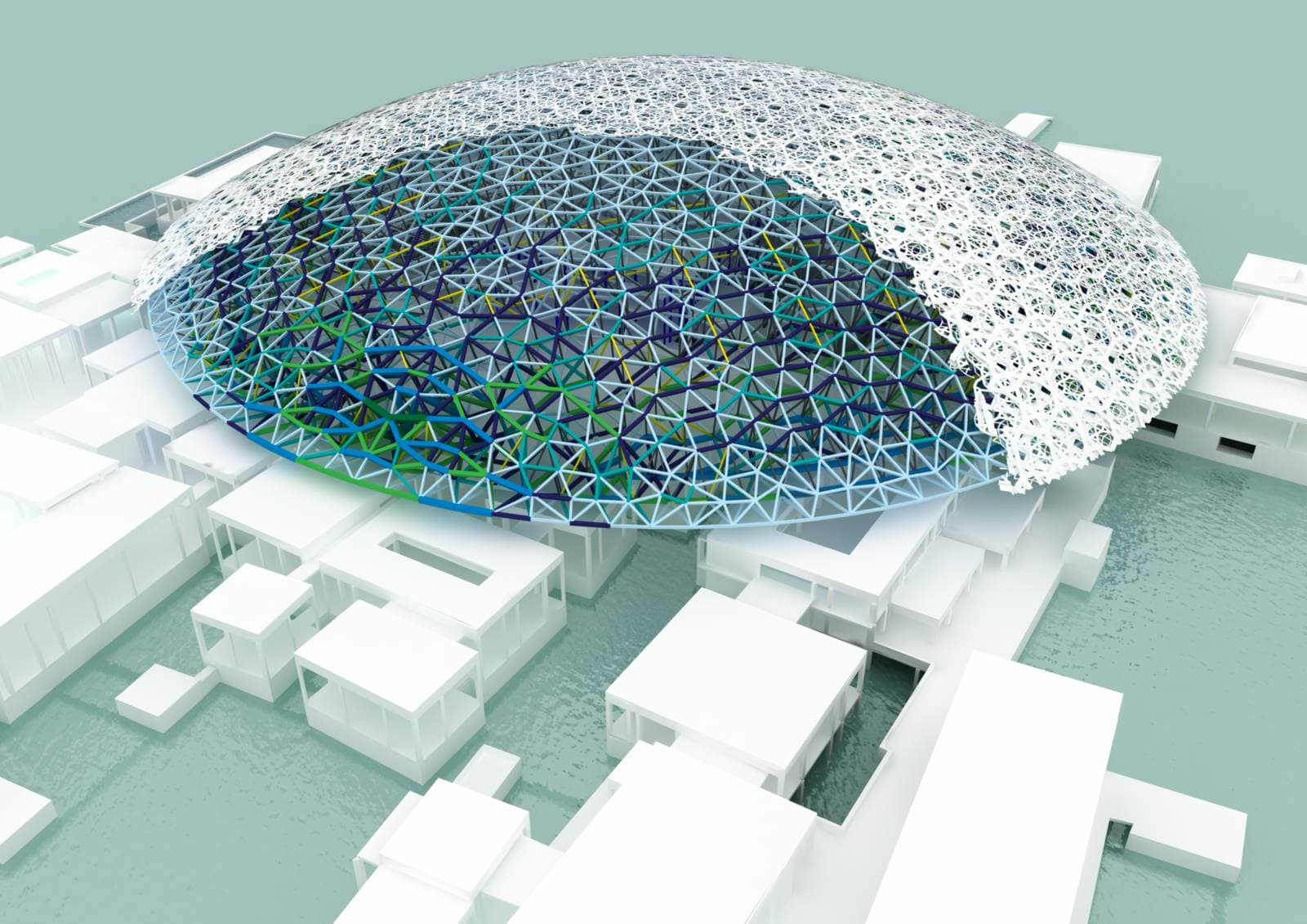 Above: The dome's structure is constructed from 85 super-sized steel elements each weighing between 50 and 70 tonnes (image courtesy of Büro Happold).

Creating the museum’s rain of light effect was far from easy. The Dome’s steel structural core is covered with eight perforated layers of cladding – four on top and four underneath. These layers are formed from 7,850 star-shaped aluminum and stainless steel elements, measuring between 6 and 40 feet wide each – around 2 to 13 meters – and weighing up to 1.3 tonnes.

The effect is a seemingly random geometric arrangement. However, the pattern – the result of years of testing including a full-size mockup placed on the site – is carefully calibrated to modulate the light and temperature conditions of the internal space. 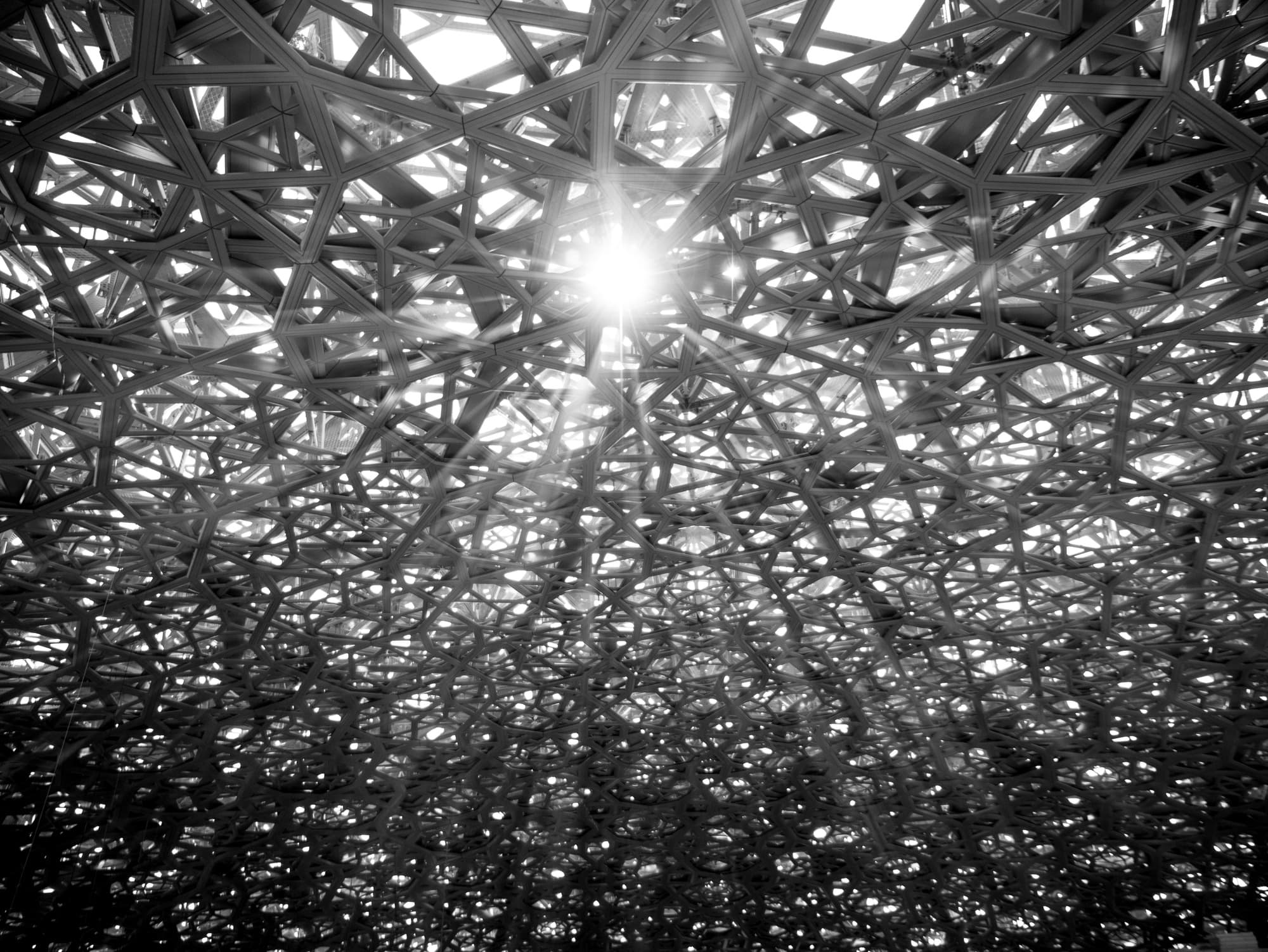 Above: The structure of the dome creates a "rain of light" inside the building (image courtesy of TDIC).

As each element is unique, co-ordination between the fabricators and the contractors had to be extremely well organized. While cranes could be used for the external cladding, the internal installation of the pieces hung from the steel structure had to be installed from scaffolding below.

The new Louvre will hold some of the world’s most valuable artworks, in one of the world’s most extreme climates, and its spectacular dome plays an important role in the museum’s environmental strategy. It acts as a shading canopy to protect the outdoor plaza and the buildings below from the sun’s intense heat.

Clustered under the dome, 55 individual buildings make up the museum city. 600,000 square feet – around 58,000 square meters – of art and exhibition spaces are arranged in a group of simple geometric forms haphazardly arranged in reference to the Arab city. 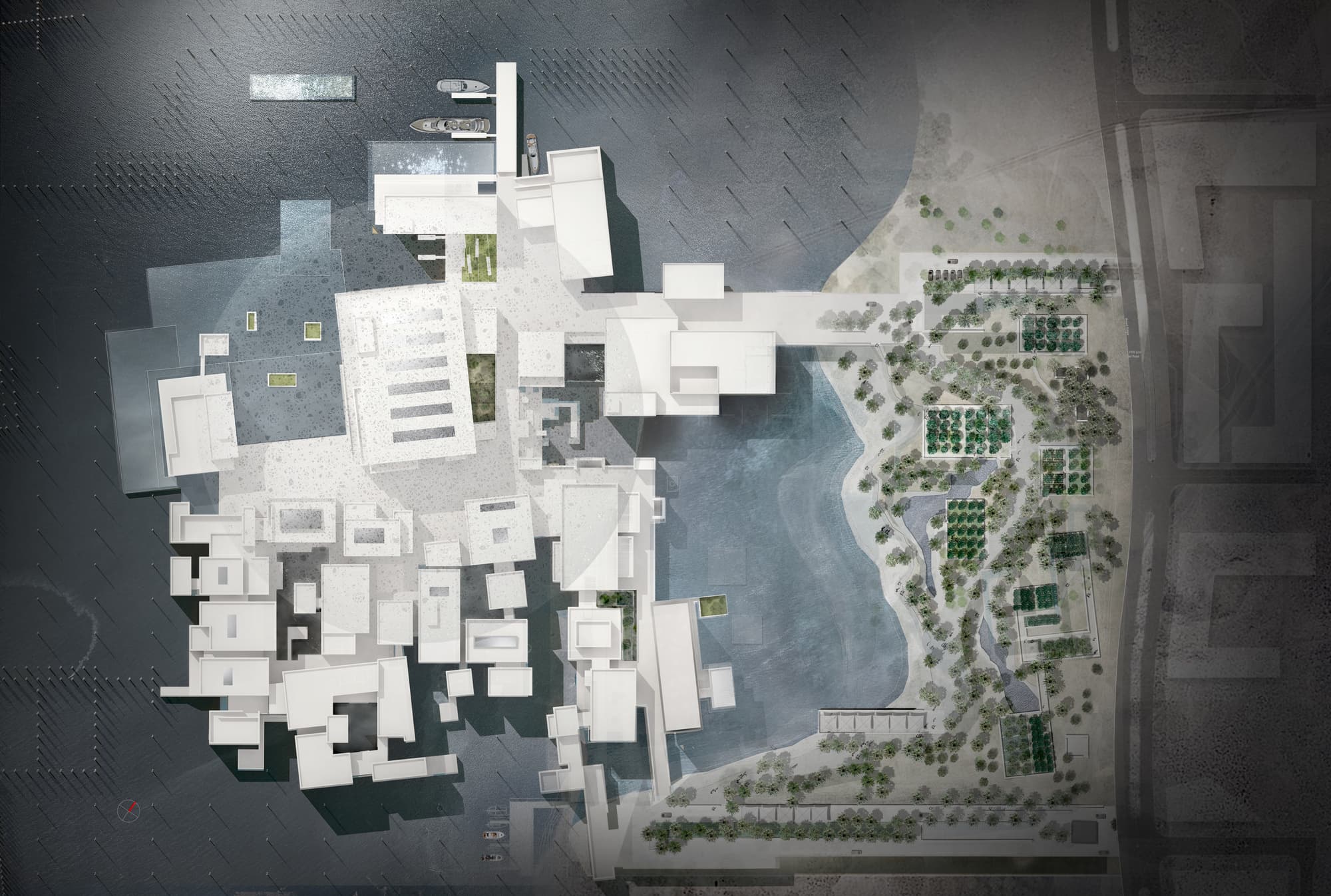 Above: Beneath the dome 55 haphazardly arranged buildings make up the museum city (image courtesy of TDIC).

Inside these buildings are large high-ceilinged gallery spaces for the display of artwork. These galleries have to adhere to strict international standards protecting artwork. To regulate the amount of daylight entering the galleries every window and roof light has three blinds – two diffusers and a blackout blind. These operate automatically depending on the time of day, the time of year and how much daylight is present.

With its impressive art, architecture and engineering, the Louvre’s desert outpost is set to be a key landmark in Abu Dhabi’s latest district when it opens in 2017.

Images courtesy of TDIC, Ateliers Jean Nouvel, Frank Gehry, Foster + Partners, Zaha Hadid Architects, Tadao Ando, Louvre Abu Dhabi and Buro Happold. We welcome you sharing our content to inspire others, but please be nice and play by our rules.