How To Dispose of a Skyscraper

THE SCALE and ambition of skyscrapers leads many of us to view them as permanent fixtures on our city skylines - but for all their size and presence, these huge structures are in fact just as replaceable as anything else we build.

So what do you do with buildings this big when they reach the end of their lives? How do you demolish them in the middle of such heavily developed and densely populated areas?

To date, only a handful of towers taller than 150 metres have ever been intentionally destroyed.

The process is highly complex, specialist and fraught with challenges 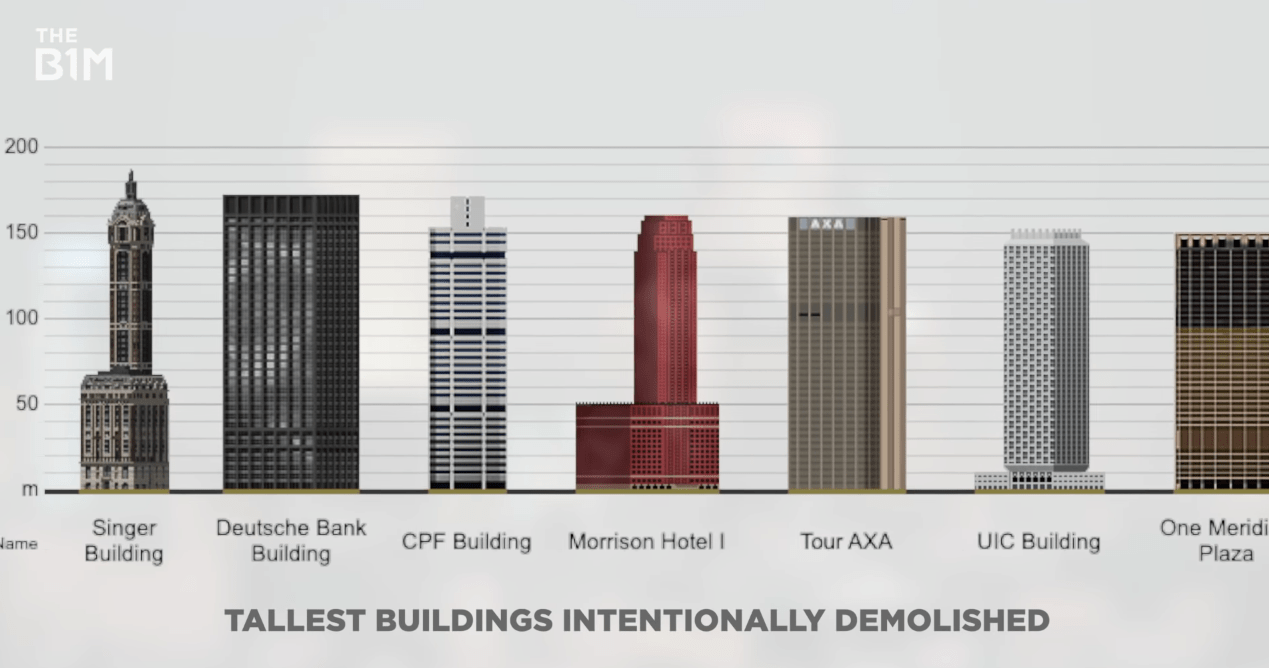 Above: Only a handful of skyscrapers have ever been demolished, but that number is set to rise (image courtesy of SkyscraperPage).

Skyscrapers are a highly effective way of creating space in dense city centres, but with life-spans ranging from 50-100 years, many no longer provide the right type of space needed in a modern metropolis.

Now, an increasing number of tall buildings around the world are being earmarked for demolition, clearing the way for even larger developments.

When we think about the demolition of a building, many of us imagine wrecking balls and dramatic implosions. 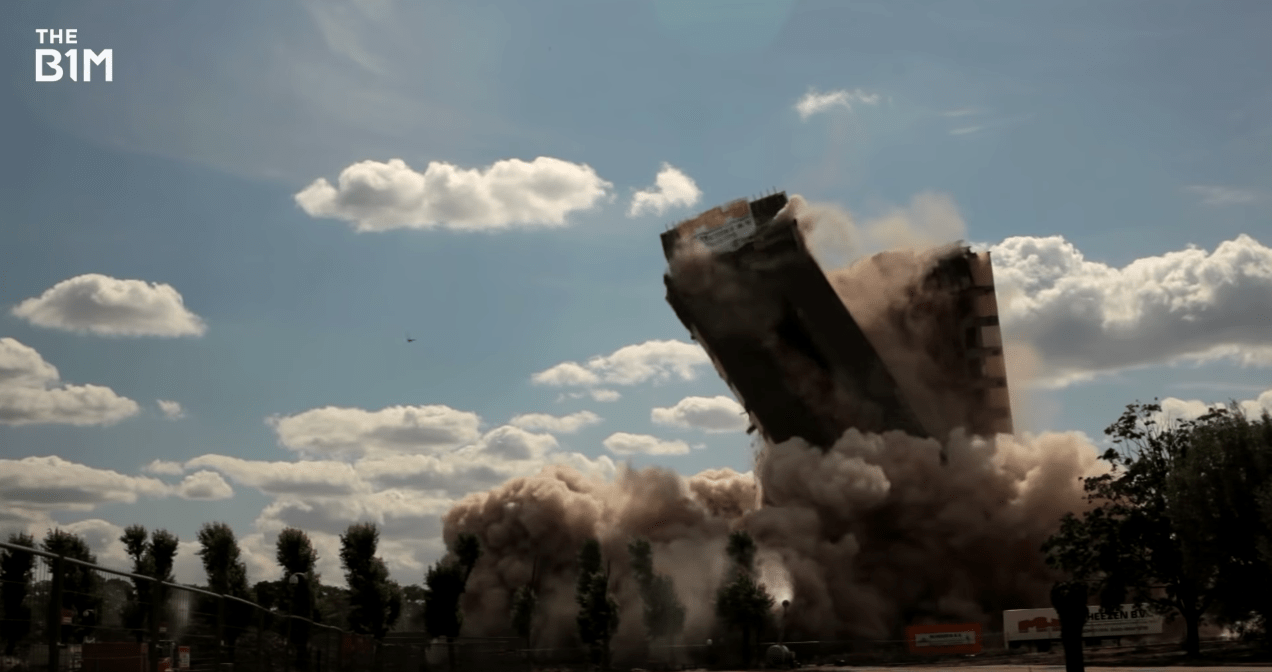 Above: While implosions are used on large, isolated buildings, their use in built-up city centres is difficult.

But while these methods may be the quickest way to destroy large structures - like stadiums or casinos - their use within built-up, heavily populated areas is challenging; and the effects of noise, dust, citizen safety and proximity to other built assets prohibits their use.

Rather than coming down in seconds, the removal of a skyscraper is in fact a carefully planned process that is carried out piece-by-piece, much like the construction of the building, but in reverse.

It’s perhaps easier to think of the process as “deconstruction” rather than “demolition”.

While skyscraper disposal can take a few different forms, the primary method sees contractors and engineers start from the top of a structure and work down. 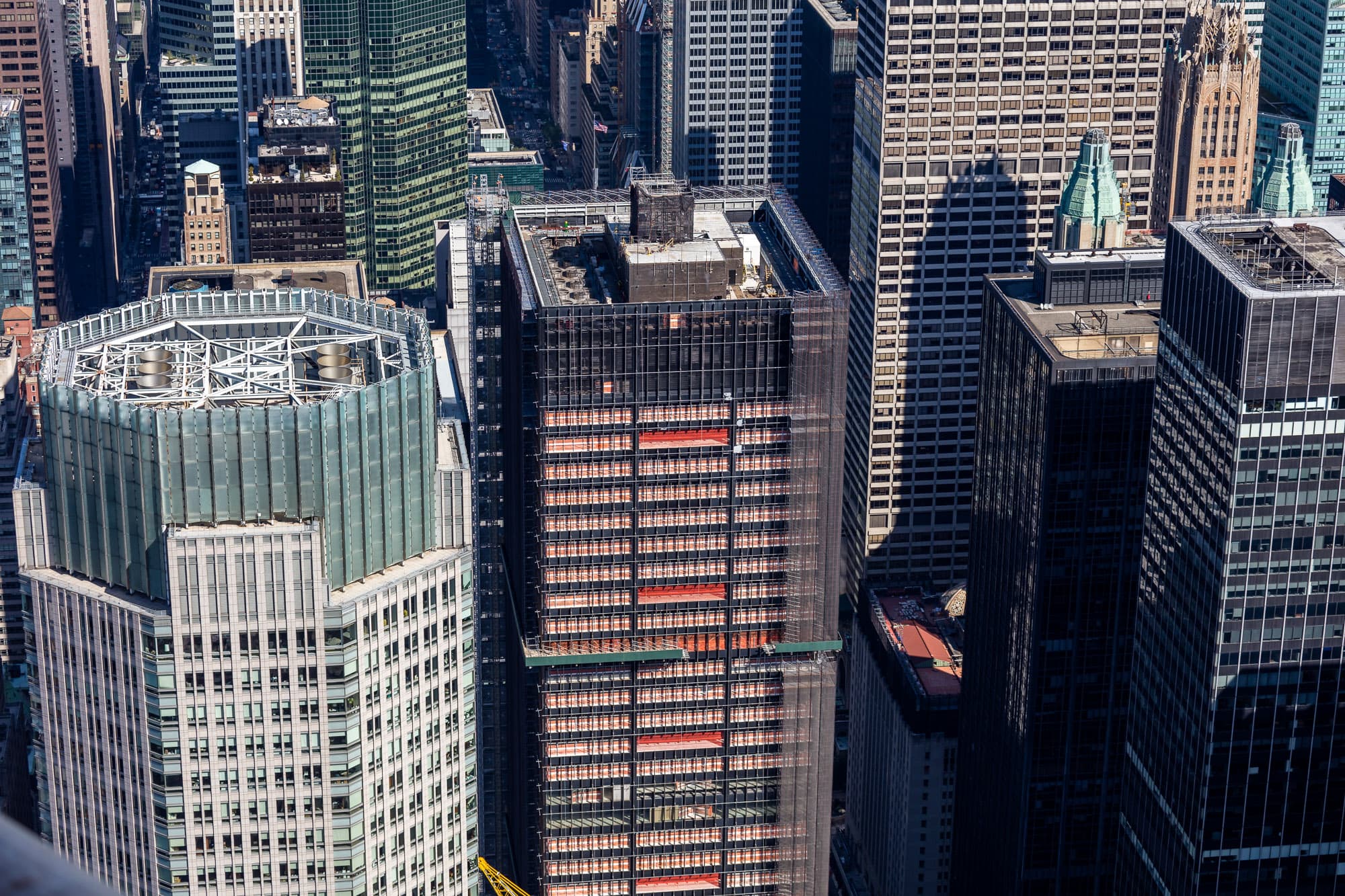 Above: The careful process of deconstruction begins at 270 Park Avenue (image courtesy of Max Touhey).

Once the relevant demolition plans and permits are approved, contractors must first contain and remove any harmful materials or substances - such as asbestos - to avoid contaminating the surrounding area.

With internal strip-out works underway, the building becomes enclosed in scaffolding and netting to minimise the impact of noise, dust and debris on the public and neighbouring properties.

While this can take the form of a complete enclosure - like that which went up around Sydney’s 188-metre AMP Tower during its partial demolition in 2019 - the sheer scale of 270 Park Avenue sees the disposal process broken-up into four phases.

Levels 16, 29 and 41 of the structure have been stripped-out and modified into bracing floors, supporting the scaffolding for each section of the tower above.

As each section is fully enclosed, internal fixtures, services, and eventually the building’s windows are removed leaving only the concrete and steel superstructure remaining. This process is repeated for each section of the tower.

The method of moving waste material from the top of the building down to street level varies between disposal projects, but contractors tend to use chutes and hoists for non-structural waste, minimising the time that cranes are needed on site.

With windows and cladding removed and the tower stripped to its core superstructure, small excavators and handheld tools are used to break-up the concrete floor slabs and steel framing.

This process is steadily repeated level-by-level until the skyscraper is no more.

Though there are alternatives to this methods, where all work is contained within a hydraulic framework, the principles remain much the same. 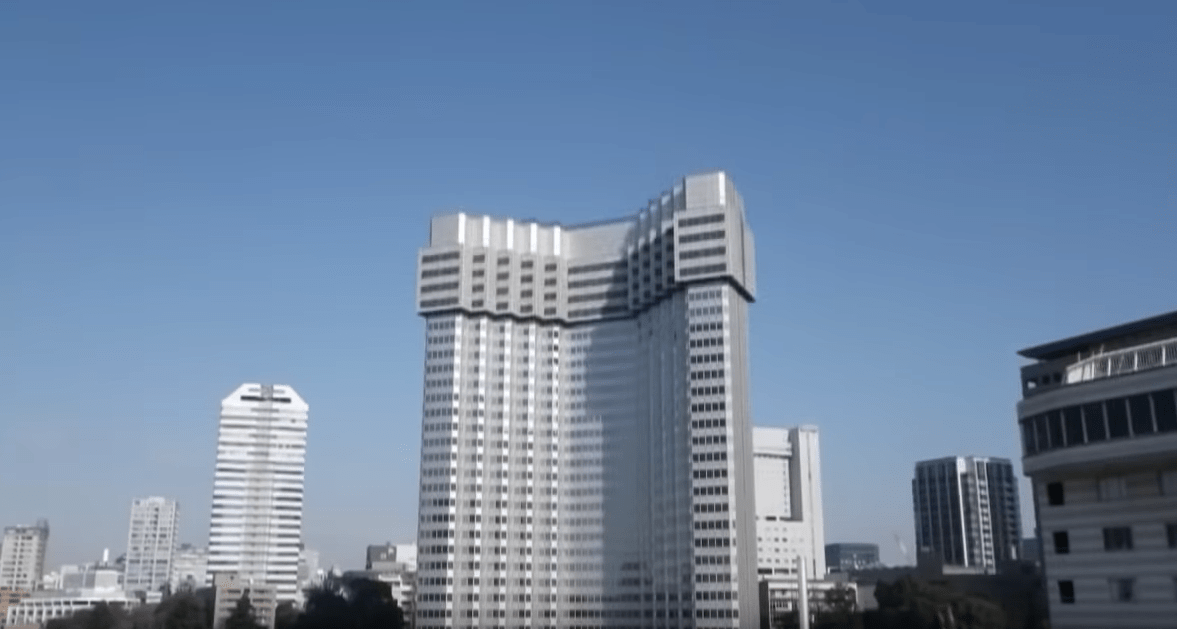 Above: An hydraulic formwork being used to carefully deconstruct a skyscraper in Japan (image courtesy of Taisei Corporation).

While tearing down an entire skyscraper could be seen as wasteful, it is important to note that landfill costs account for a large proportion of a demolition contract.

As such, every effort is made to reduce the amount of waste that is sent to landfill by recycling and reusing waste material as far as possible.

To date, 270 Park Avenue has reportedly diverted over 90% of its waste away from landfill, putting it well ahead of LEED’s highest standards set for demolition projects.

The cost and effort required to fully dispose of skyscraper makes it a significant undertaking, and the process is seen as a last resort amongst developers.

Though more skyscrapers are set to be demolished as urban populations expand, building adaptation is becoming an increasingly attractive alternative to demolition. 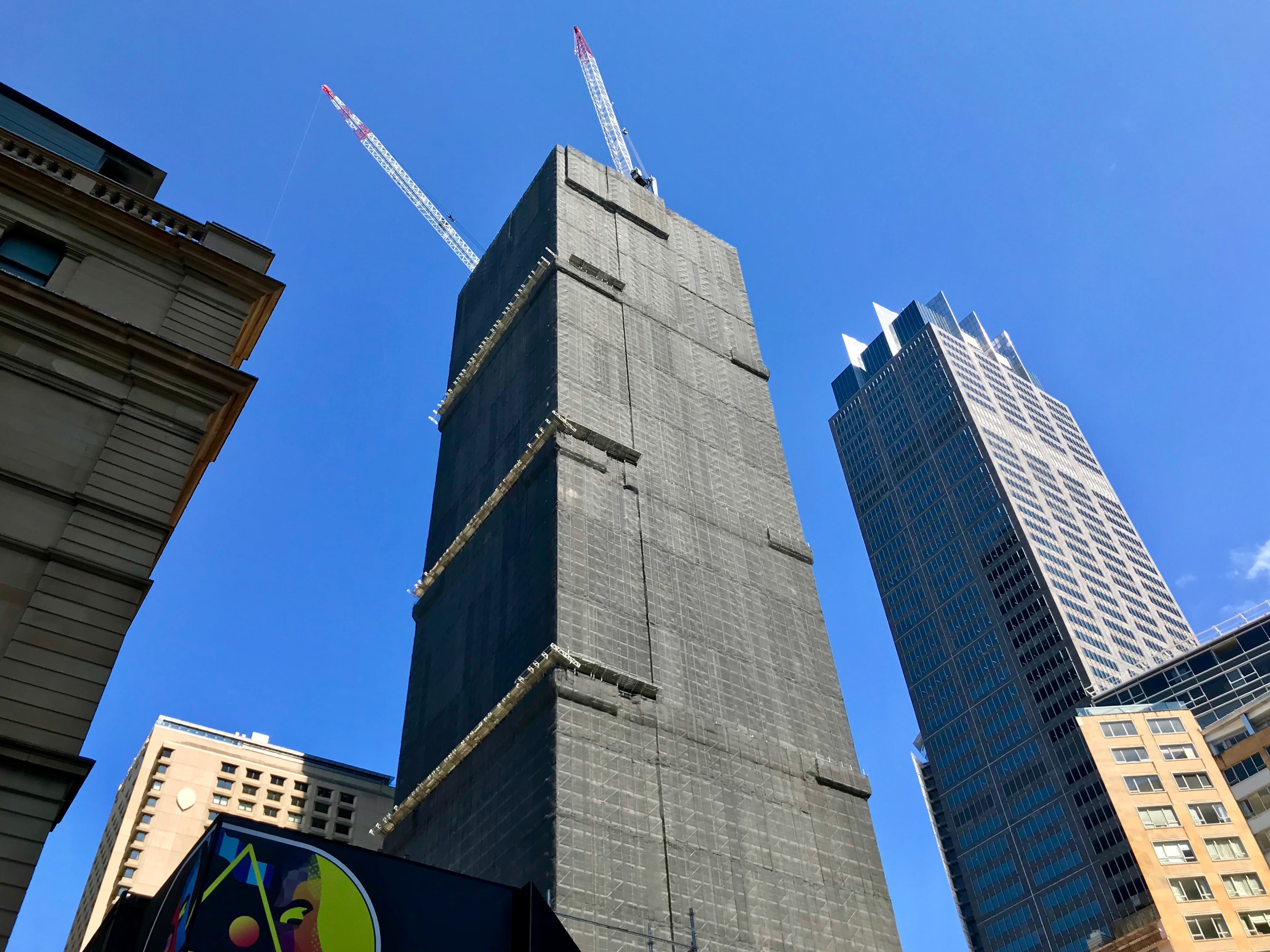 Above and Below: Sydney's AMP Tower retained over 60% of its original structure as it was converted into a new state-of-the-art commercial building (images courtesy of Con Dongas [above] and AMP Capital [below]). 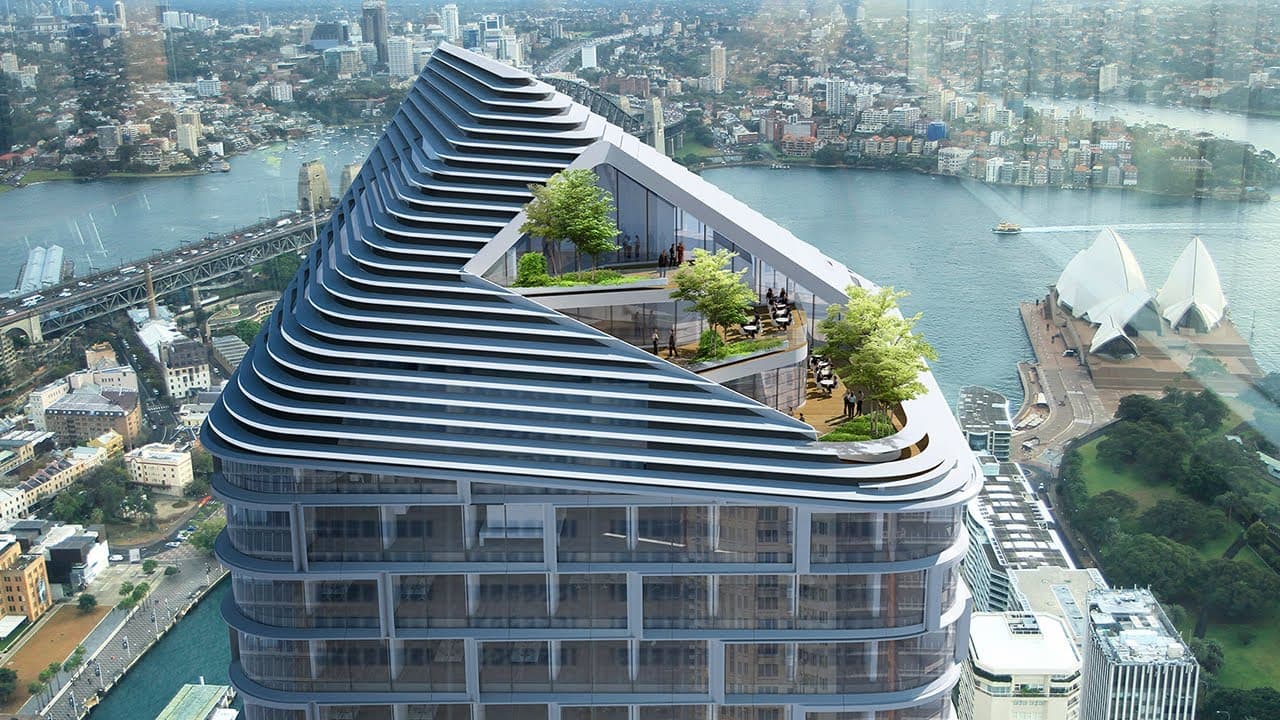 This process sees skyscrapers significantly altered for new uses while still retaining the bulk of their superstructures.

New York City’s Woolworth Building had its upper floors converted to luxury residential apartments when the tower’s structure prevented it from offering the open-plan offices that large companies required.

While in Sydney, the redundant AMP Tower will retain over 60% of its original structure as it is transformed into Quay Quarter Tower, a 216-metre sustainable skyscraper.