FOR HUNDREDS of years Antwerp has been one of Europe’s key ports. Its history as a gateway for trade can be traced back as early as the 12th Century AD. Recently, its Port Authority grouped their technical and administrative services into one new headquarter location.

Positioned on the docklands, the new facility consists of an existing heritage building and a newly formed extension.

The existing structure is a protected replica of a Hanseatic House and former fire station. This heritage building required extending in order to house the 500 or so staff working across the Port Authority’s various departments. 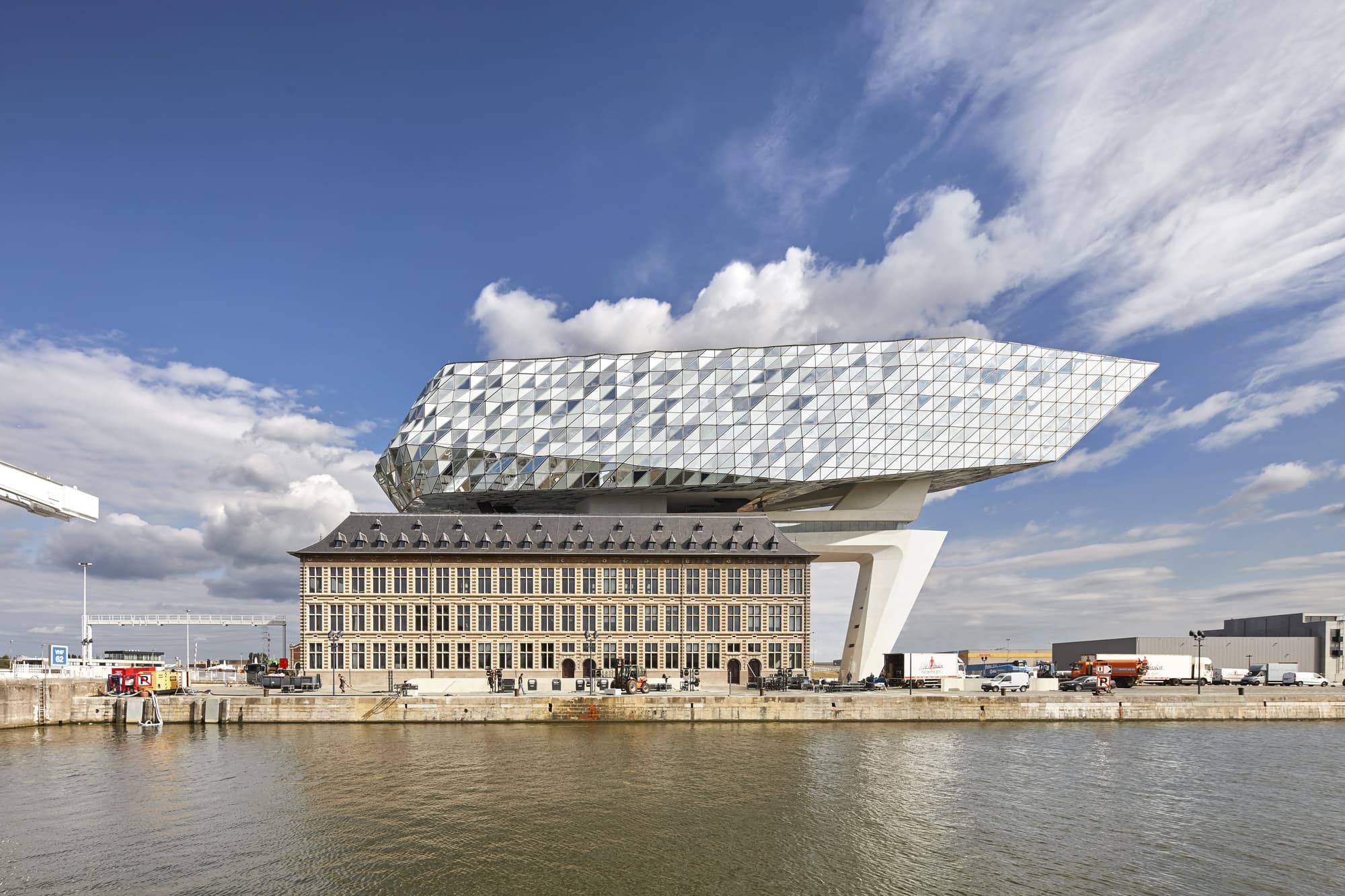 Above: The Port Authority's new headquarters consists of an existing heritage building, topped with a new extension (image courtesy of Hufton + Crow).

Historical studies by the design team – led by Zaha Hadid Architects (ZHA) – revealed plans for a central spire to the building that was never constructed. With a desire to retain all four of the original façades and not to cover them with a new structure, they decided to extend vertically with a dynamic beam-shaped form that is itself four-storeys high. The new structure seeks to complete the vertical nature of the original design concept. 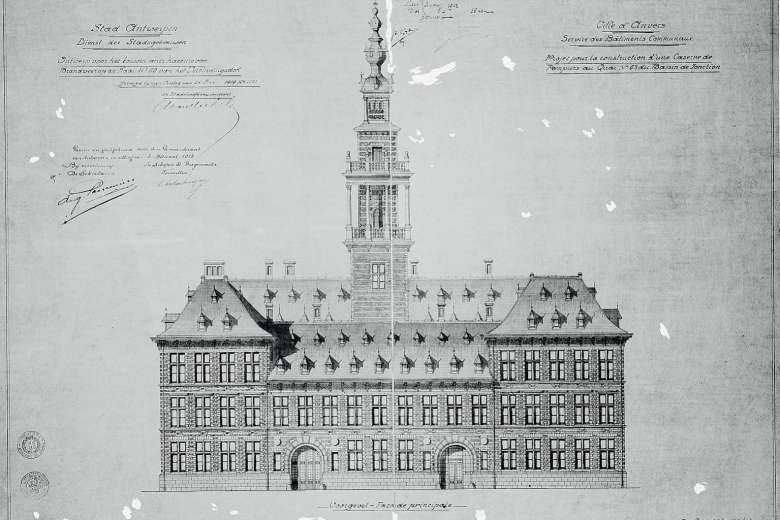 Above: Historical research discovered plans for the former fire station to have a central spire (image courtesy of The New York Times). 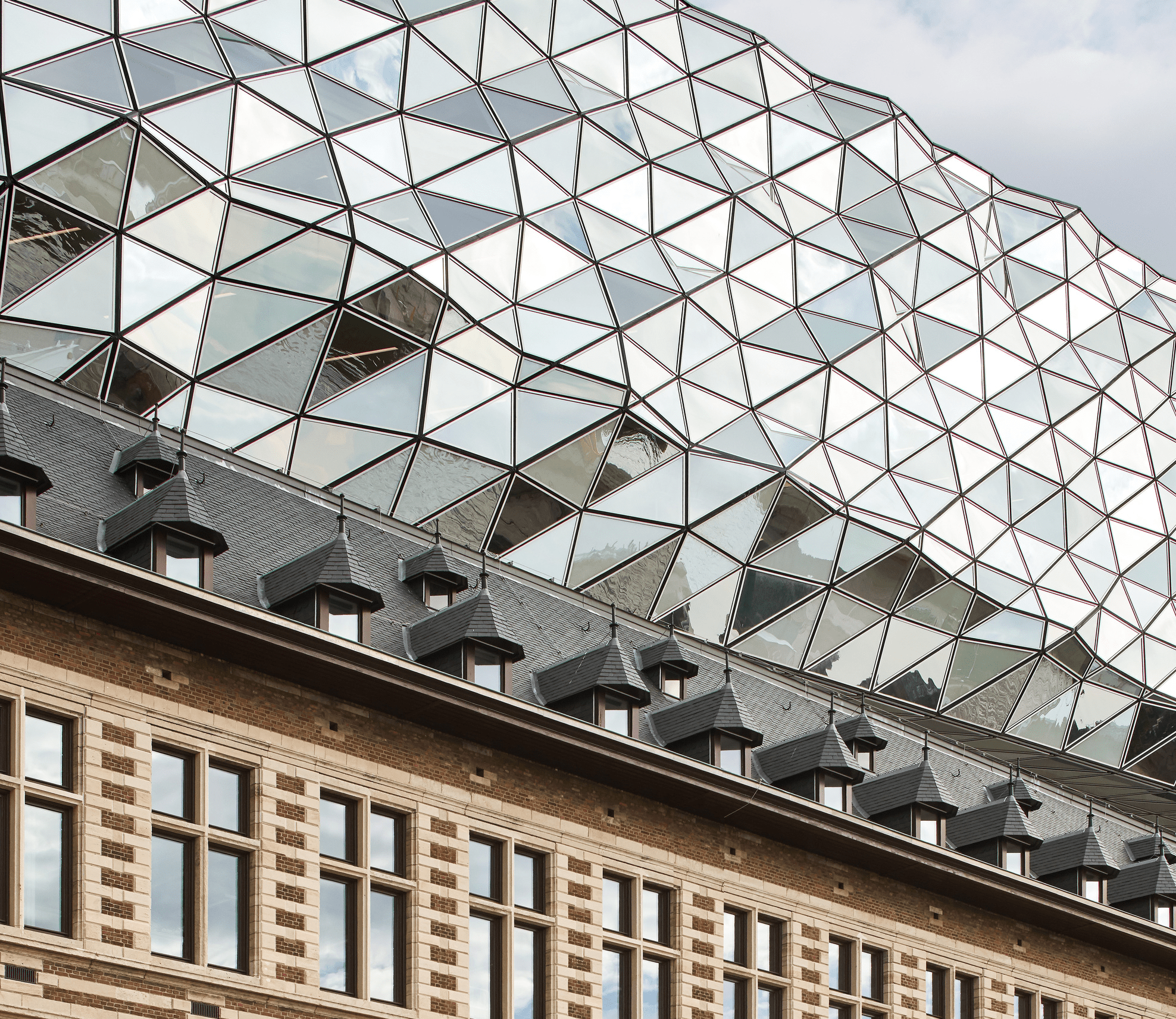 Above: The extension's exterior echoes the surrounding water ways and nods to Antwerp’s diamond industry (image courtesy of Hufton + Crow).

To create such a structure, new foundations were first formed in the existing building’s courtyard and immediately adjacent to its external southern façade. From there, two concrete towers were constructed and bridged. Foundation steelwork was installed in key positions, including several beams extending directly from the ground-level foundations in the courtyard. 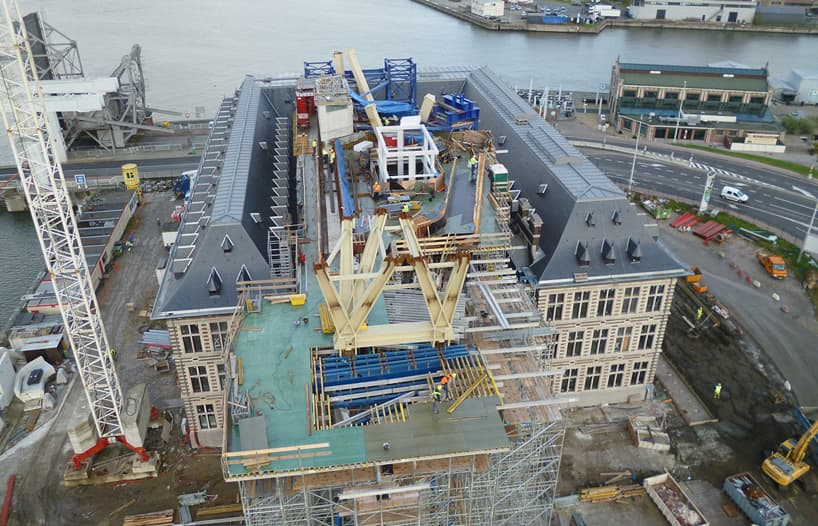 Above: Construction work to the new extension progressing on site (image courtesy of Interbuild).

With this in place, the steel frame element of the superstructure was assembled in two phases. Concrete floors were poured and the building was clad as numerous internal fit-out and finishing trades commenced.

A below-ground garage provides vehicle and cycle parking for Port Authority staff. The extension’s concrete towers create a link with the heritage part of the building and enable access to the newly added upper levels. 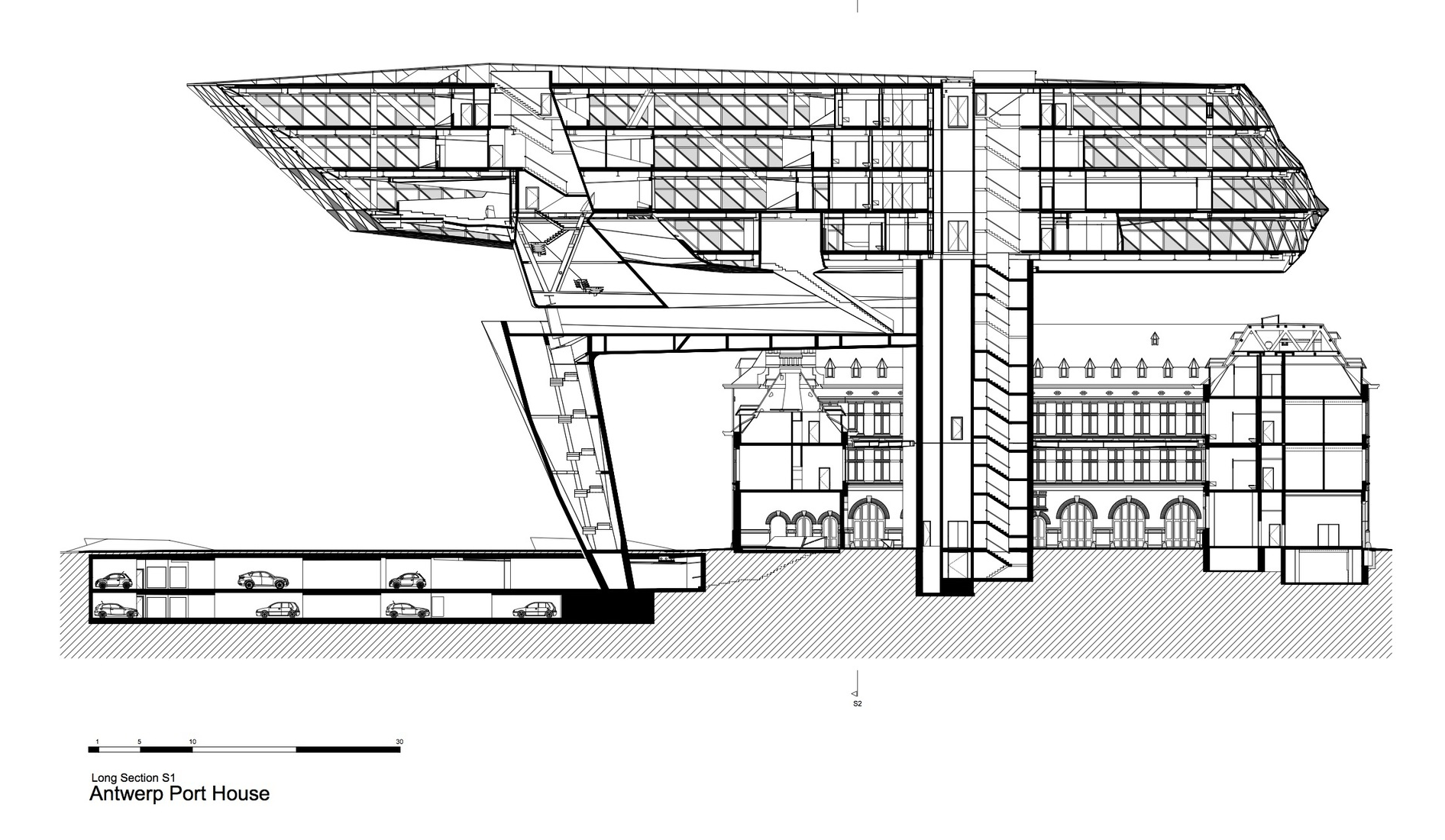 Above: The four-storey extension links with the former fire station via its concrete supports (section courtesy of Zaha Hadid Architects).

Now complete, the new Port House combines Antwerp’s historic past with its progressive forward-thinking future; quite literally pointing towards the horizon.

The work space it creates allows staff to operate flexibly from mobile locations and different environments depending on their need – whether it be a meeting, a telephone call or desk work.

In tribute, the completed headquarter building has been named after Zaha Hadid herself. It is one of several projects and design concepts that was started but not completed during her lifetime. 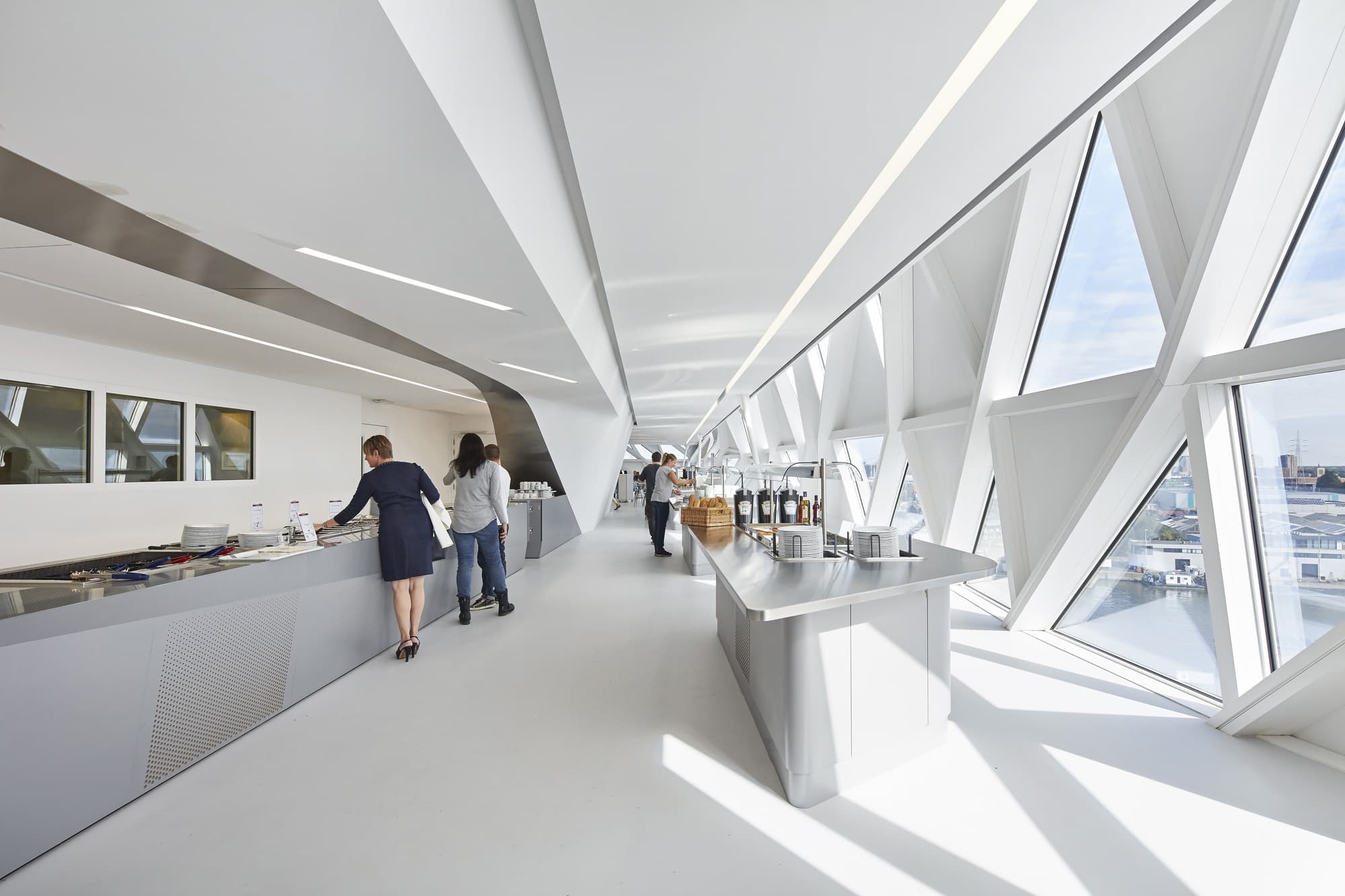 Above: Part of the new facility's impressive interior. Below: The completed project sitting beside Antwerp's waterways (images courtesy of Hufton + Crow [above] and Helene Binet [below]). 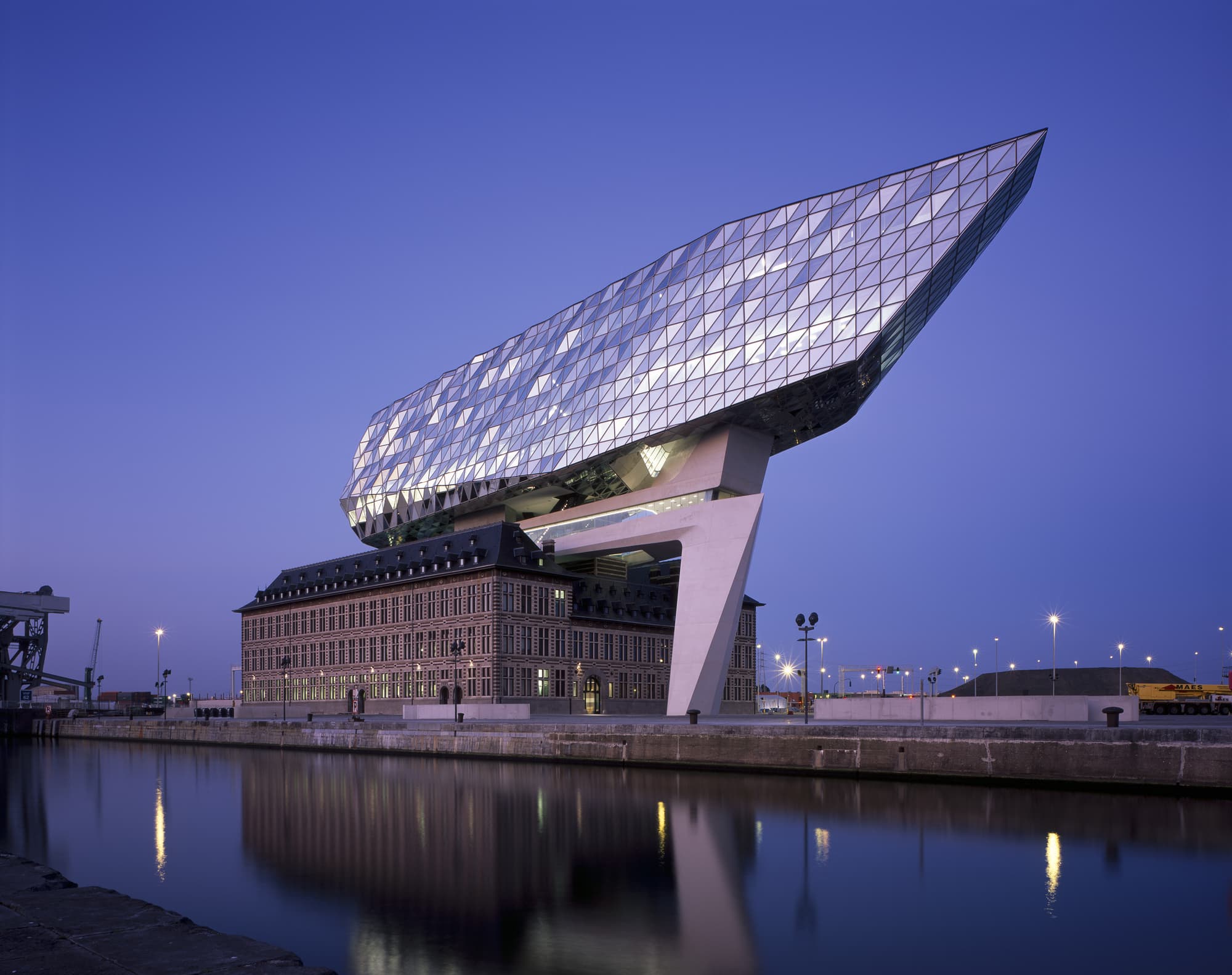