WHILE skyscrapers were home to commercial office space for much of the 20th Century, the pressures of our ever-expanding urban populations have driven a rise in residential towers over recent decades.

In Melbourne, a recent skyscraper boom has transformed the skyline and two-thirds of the city’s skyscrapers now serve residential purposes.

The largest of these, Australia 108, is set to become the tallest building in the city and feature the highest residences in the southern hemisphere when completed. 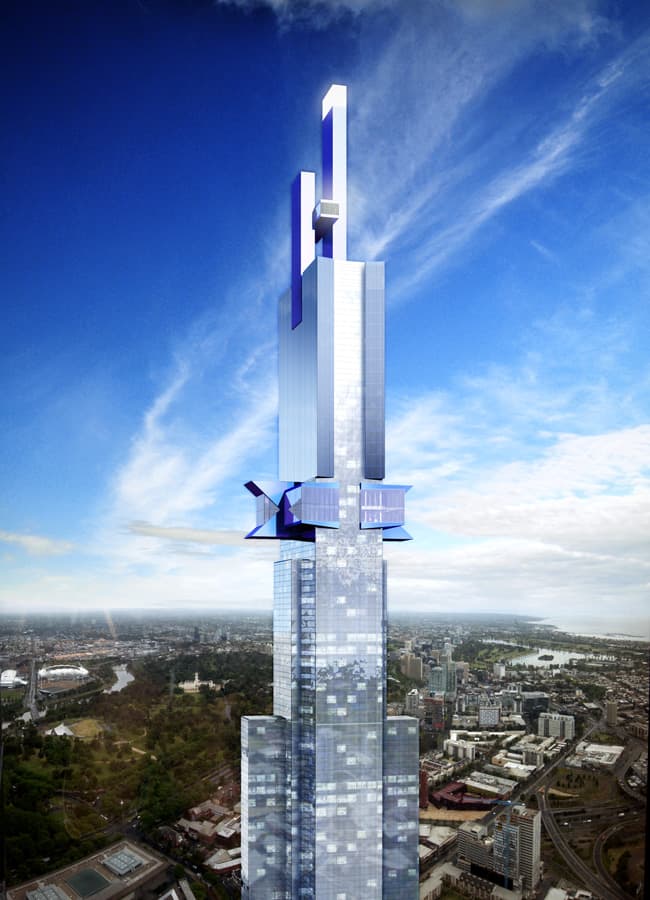 Above: Originally planned to rise 388 metres, Australia 108 was scaled back due to breaching aviation height limits (image courtesy of Fender Katsalidis Architects).

Originally approved as a mixed-use hotel and residential tower in 2013, Australia 108 was set to rise 388 metres and 108 storeys above Melbourne, making it the country’s tallest building.

However, the project was shelved just four months after approval when it was discovered that the structure would breach the flight path of a nearby airport.

Retaining many elements of the original design, architects Fender Katsalidis reduced the height of the structure to 317 metres and redesigned its 100 storeys for residential use, regaining approval for the development in 2014. 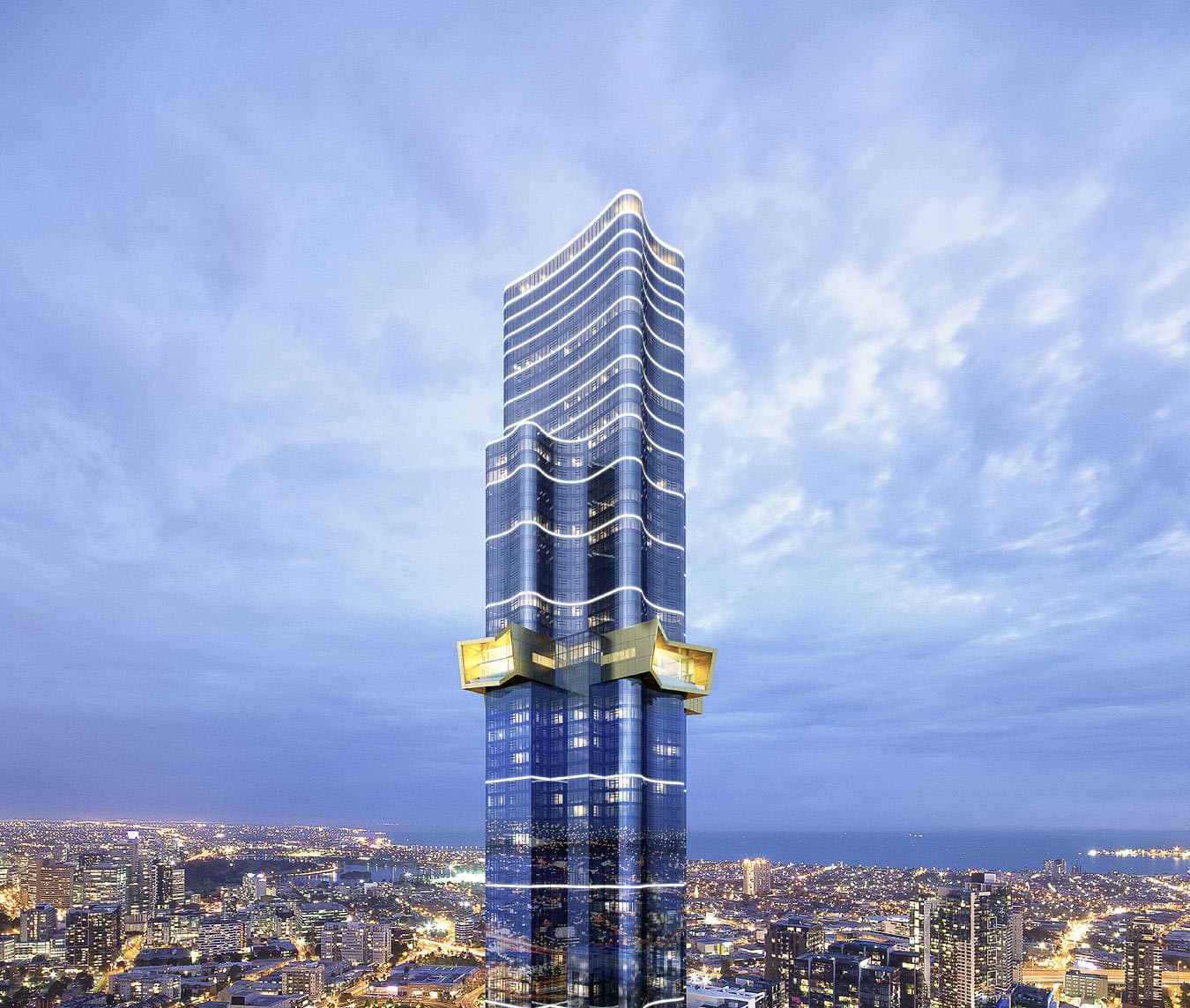 Above: Keeping many of the original design elements, Australia 108 was approved at 100 floors and 317 metres in 2014 (image courtesy of Fender Katsalidis Architects).

Designed by the same architect, Australia 108 shares a number of key features with the city’s current tallest building, the Eureka Tower.

Both towers feature a stepped profile, distinctive bands across their facades and prominent gold features that pay homage to the Victorian gold rush of the 19th Century that cemented Melbourne as one of Australia’s most important cities.

Breaking-ground in 2015, the foundations of Australia 108 were some of the most substantial ever constructed in the city.

With the site located in the historically swampy area of Melbourne’s Southbank, engineers initially spent nine months boring piles to a depth of 46 metres.

The building’s superstructure is supported internally by two-metre thick concrete core walls and a series of mega columns which extend the height of the structure while being cleverly integrated into each apartment so as to go unnoticed by residents.

Externally, the tower’s form is a response to the extreme wind loads acting on the structure. 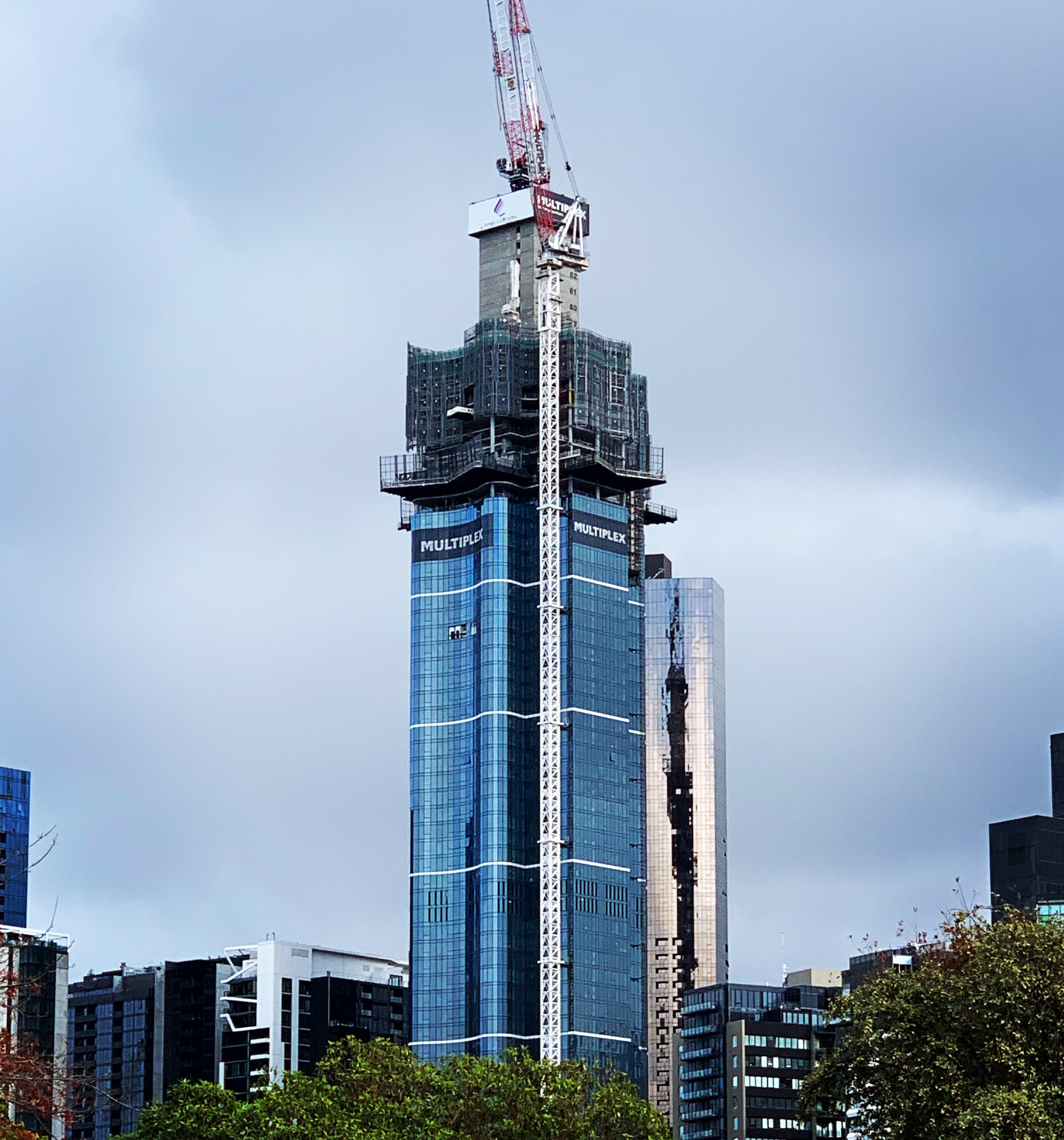 Above: The tower's curved facade helps to disrupt strong winds acting on the structure (image courtesy of Jason Cooen).

Instead of hard corners, much of the tower’s perimeter is rounded with large curves that help to disrupt the powerful winds blowing off the bay.

Much like a tuned-mass damper, this system shifts the tower’s centre of gravity by using large volumes of liquid to counteract lateral loads acting on the structure and minimise movement for occupants.

Due to the project’s scale, the tower was in fact split into five distinct phases of development, with completed floors handed over early rather than being left vacant until the entire project had competed.

In June 2018, 277 of the 1,105 apartments available in the tower were released for occupation, with more than 50 storeys still to be constructed above them. 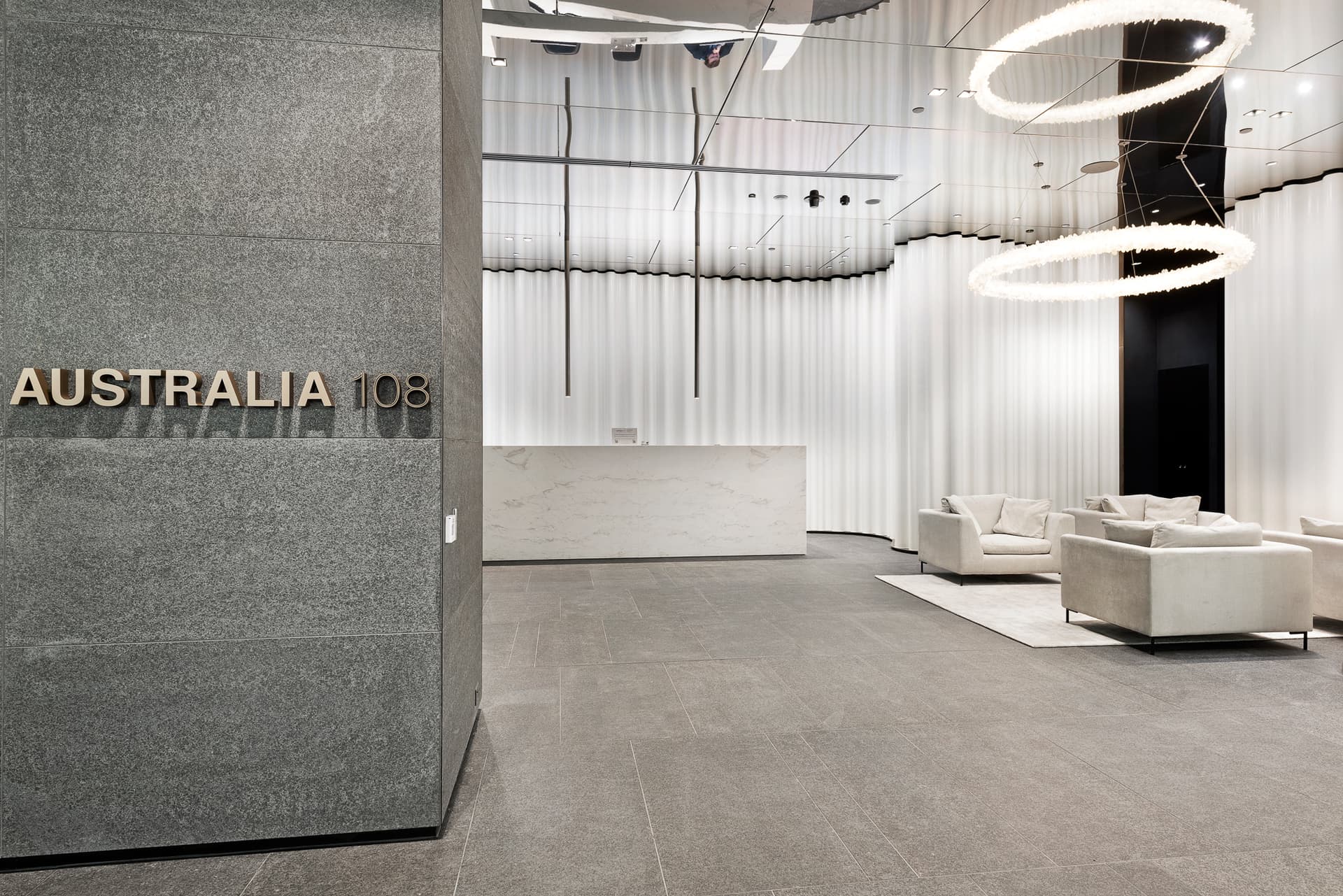 Above: In order for residents to move in before the structure completed, some of the elevators and the lobby were finished allowing for the lower levels to be occupied (image courtesy of Mike Baker).

To ensure resident comfort, the lobby of the tower and some of its elevator systems were completed early, while construction teams continue to enter the site from alternative access points.

Additionally, a 20 storey “buffer space” was created between the occupied floors and those still under construction to ensure that residents were shielded from any noise or vibration.

This method of staged release will continue roughly every six months until the building is fully completed in 2020.

A STAR ON THE HORIZON

Perhaps the most unique feature of Australia 108 is its striking facade and distinct starburst element.

Inspired by the Commonwealth Star on the Australian flag, the gold starburst covers three storeys of the tower – two of which are habitable – and cantilevers up to six metres beyond the building footprint.

Containing two levels of amenities across the 70th and 71st floors, the starburst contains a sky garden, dining rooms and a gym as well as two infinity pools located 210 metres above street level.

While Level 69 acts as a supporting outrigger floor to the cantilevered structure above – and required extensive amounts of concrete to construct – most of the starburst consists of a steel truss structure that was lifted into place after being largely pre-assembled on the ground. 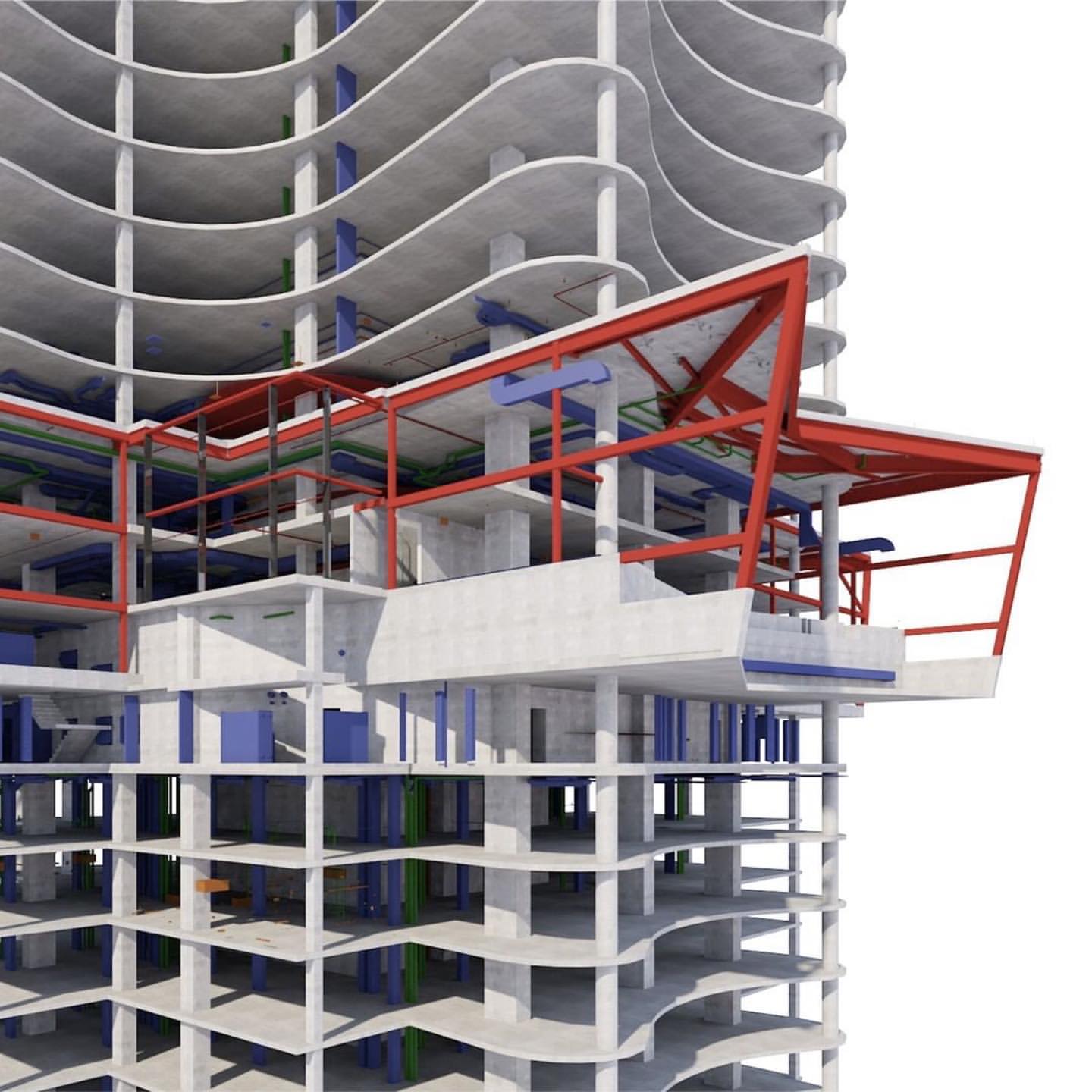 Above: The starburst feature required substantial amounts of supporting concrete on level 69 but most of the structure is, in fact, a lightweight steel frame (image courtesy of Fender Katsalidis Architects).

In addition to these amenities, residents have will also have access to a podium terrace, theatre and a spa within the tower.

While less obvious than the starburst, the building’s façade hides a unique visual feature of its own.

While appearing as distinct white bands during the day, as night approaches, LED lights within these bands illuminate offering a striking visual display on the skyline.

While Australia 108 will not officially take the title of Australia’s tallest skyscraper away from Q1 on the Gold Coast, it will lay claim to the title of the southern hemisphere’s highest residence, with its record-breaking penthouse on the 100th floor.

When it sold to a Chinese businessman for AUD $25 million (USD $17.4 million) it became the most expensive apartment purchased in Australia at the time. 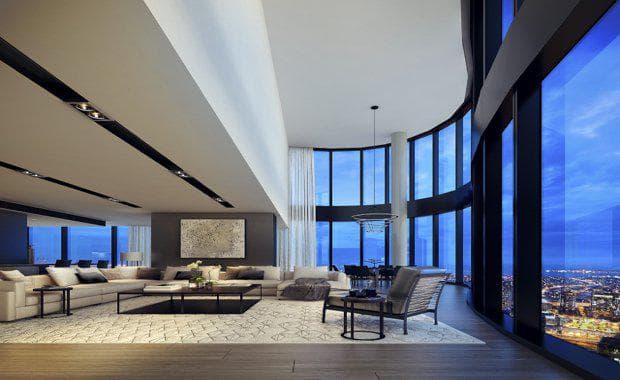 Above: At the time of sale, the 100th-floor penthouse of Australia 108 was the most expensive apartment ever purchased in Australia ( image courtesy of Fender Katsalidis Architects).

Though Australia 108 is on its way to becoming the city’s tallest skyscraper, plans are already underway for future schemes that would dwarf this impressive structure.

Melbourne made headlines in 2018 when architects from around the world competed in a high-profile competition to design a landmark tower on the site opposite Australia 108.

UNStudio and Cox Architecture were declared the winners with their “Green Spine” scheme which would rise to a height of 356 metres taking advantage of recent changes to the aviation restrictions which limited the height of Australia 108 back in 2013.

However, with a start date not expected before 2022 and the construction landscape forever changing, Australia 108 looks set to hold onto its title for some years to come.