Why We Should Celebrate (Not Hate) New York's Vessel

SET to totally transform the Manhattan skyline when it fully completes in 2024, Hudson Yards is the largest private development project in United Stated (US) history.

It even features a new arts centre with an impressive retractable roof.

At the centre of the new development sits The Vessel - a truly unique structure that, despite sitting much closer to ground level, still manages to overshadow many of the 200 metre towers around it.

Indeed the work has polarised opinion and faced criticism since its unveiling, with few arguing in its favour.

It’s time to put that right. This is why the project should be praised, not condemned. 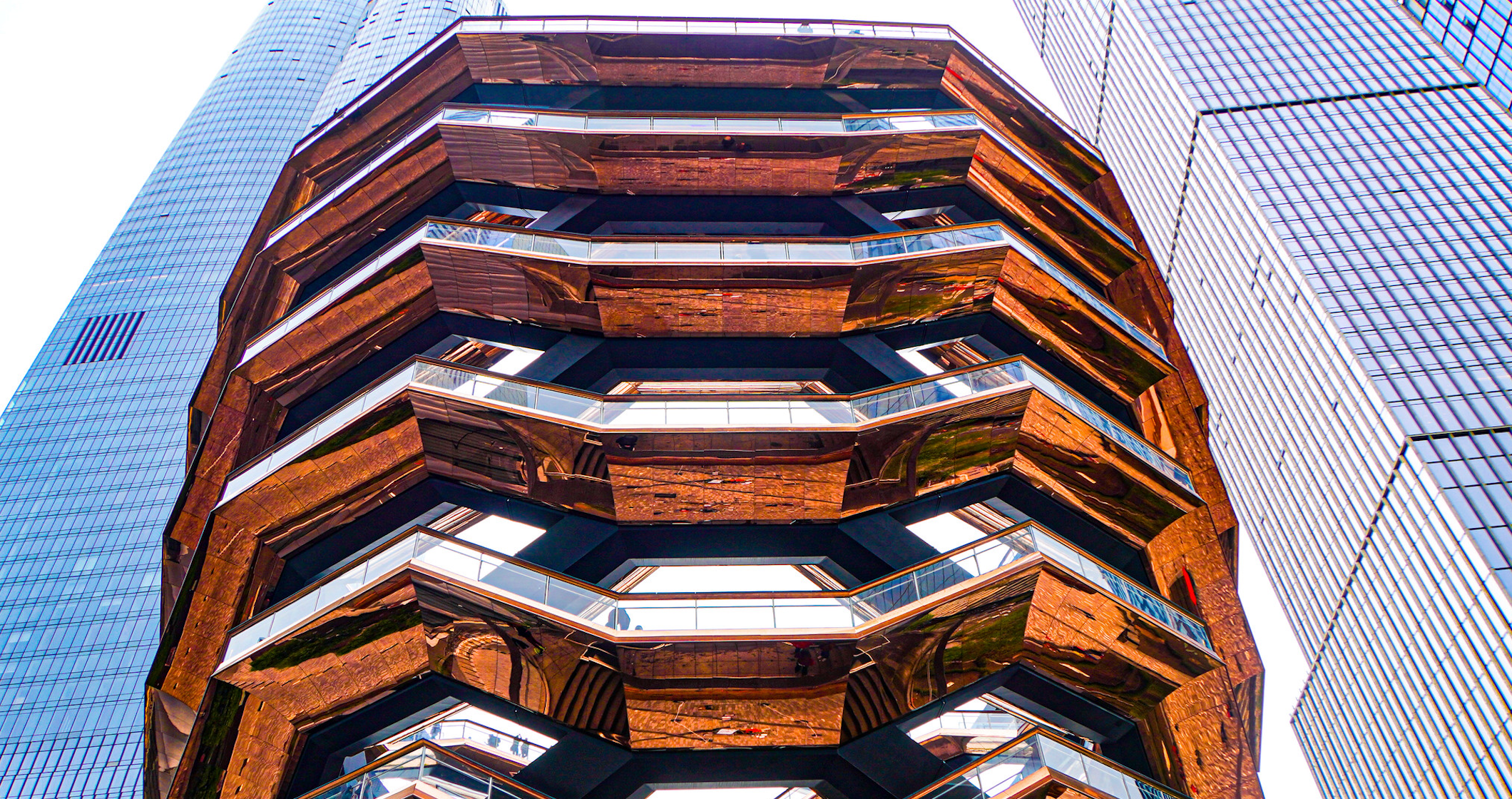 Designed by Thomas Heatherwick, the Vessel is a striking new urban landmark for New York.

The structure is formed of 154 interconnected flights of stairs, 2,500 individual steps and 80 landings, offering views of the city’s West Side, surrounding architecture and landscaped gardens.

Heatherwick’s vision was to create a unique, interactive and meaningful public space that could be climbed and explored, with room for some 700 visitors at a time.

Heatherwick Studio were inspired by the stepwells of India – ancient subterranean structures that are now considered marvels of architecture and geometry.

However instead of cascading downwards, this creation branches out in the opposite direction, forming a shape similar to a bowl or vessel – hence the name. The structure stretches out to 46 metres in diameter, but has a footprint just 15 metres wide.

The result is nothing short of magnificent.

A complex framework with a copper-coated exterior and raw painted steel surfaces that combine to create a dazzling reflective maze while offering a whole new perspective of the city.

It’s also a wonder of construction. Perhaps unsurprisingly, the structure’s unconventional approach presented a number of challenges during the design and build phases that had to be overcome. 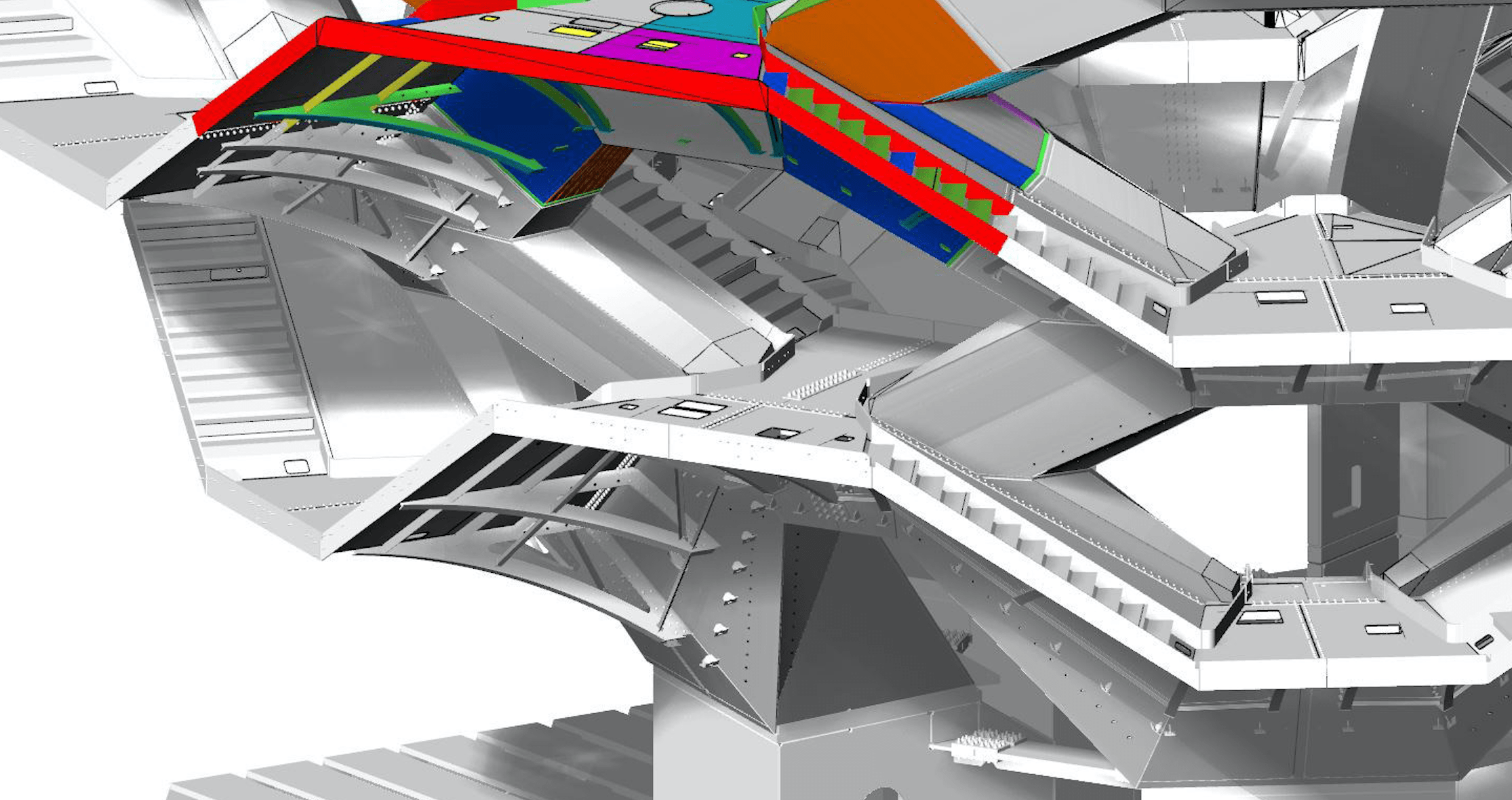 Above: Tuned mass dampers act as a counterbalance against any potential sway when the structure is at capacity (image courtesy of Heatherwick Studio).

Its lack of floors and columns meant extra care was taken to prevent extreme vibrations and oscillations when the structure is at full visitor capacity.

Following a process of detailed 3D modelling and analysis, tuned mass dampers were mounted on springs within the upper landings, acting as a counterbalance any potential sway.

To avoid taking up too much ground-level public space, the structure was built offsite by Cimolai, a company based way over in Italy, before being shipped to the US and assembled on site piece-by-piece.

The prefabricated parts - dubbed ‘dog bones’ due to their pre-assembled shape - were so large that they had to be shipped straight to Hudson Yards, rather than driven over land for any long distance.

The location of Hudson Yards towards the edge of Manhattan Island can make it susceptible to strong winds from the Hudson River, a factor which also had to be taken into account during the design phase. 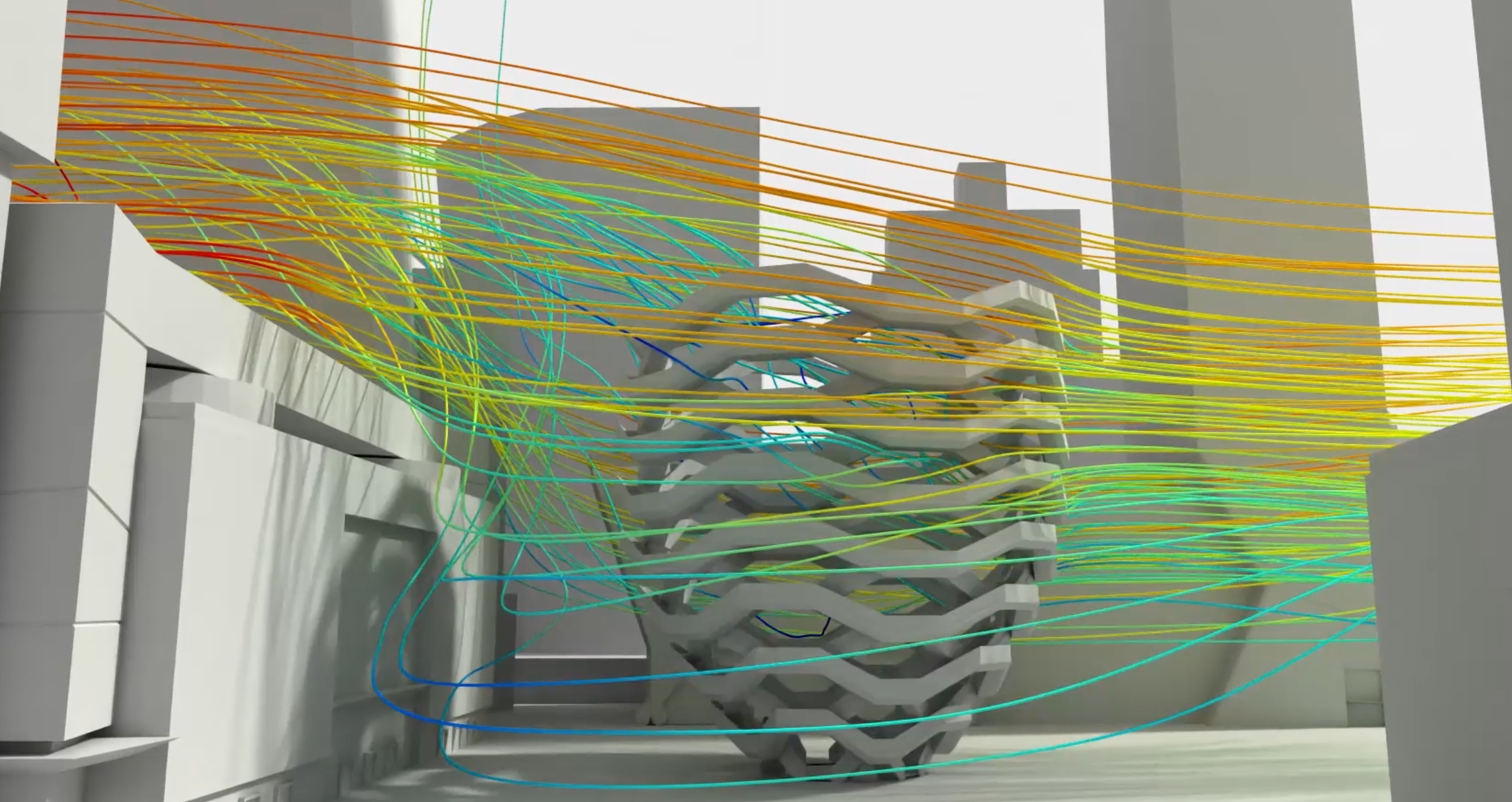 Above: Simulating the air flow using SimScale, we can see how wind passes through the Vessel, with areas of high velocity shown in red.

Above: The pressure generated by the wind can be seen on the surface of the Vessel’s structure, with the highest areas of pressure load shown in red.

With more than 150,000 users worldwide, SimScale is an easy-to-use cloud-based engineering simulation tool that enables everyone to create powerful, high-fidelity simulations in a web browser. The platform can be tried for free through the Community account, which gives access to thousands of public simulations to promote knowledge sharing and to crowdsource advice.

Despite its design and engineering, the response to the Vessel since its completion in March 2019 has not been entirely positive.

Some critics have labelled it a monument to excess, while others have called it a stairway to nowhere and questioned its overall purpose.

Design comparisons have ranged from a wastepaper basket to a giant doner kebab.

The project has also been criticised for a policy that allows the company behind the Vessel to use visitors’ photos taken on site and uploaded to social media for its own purposes. 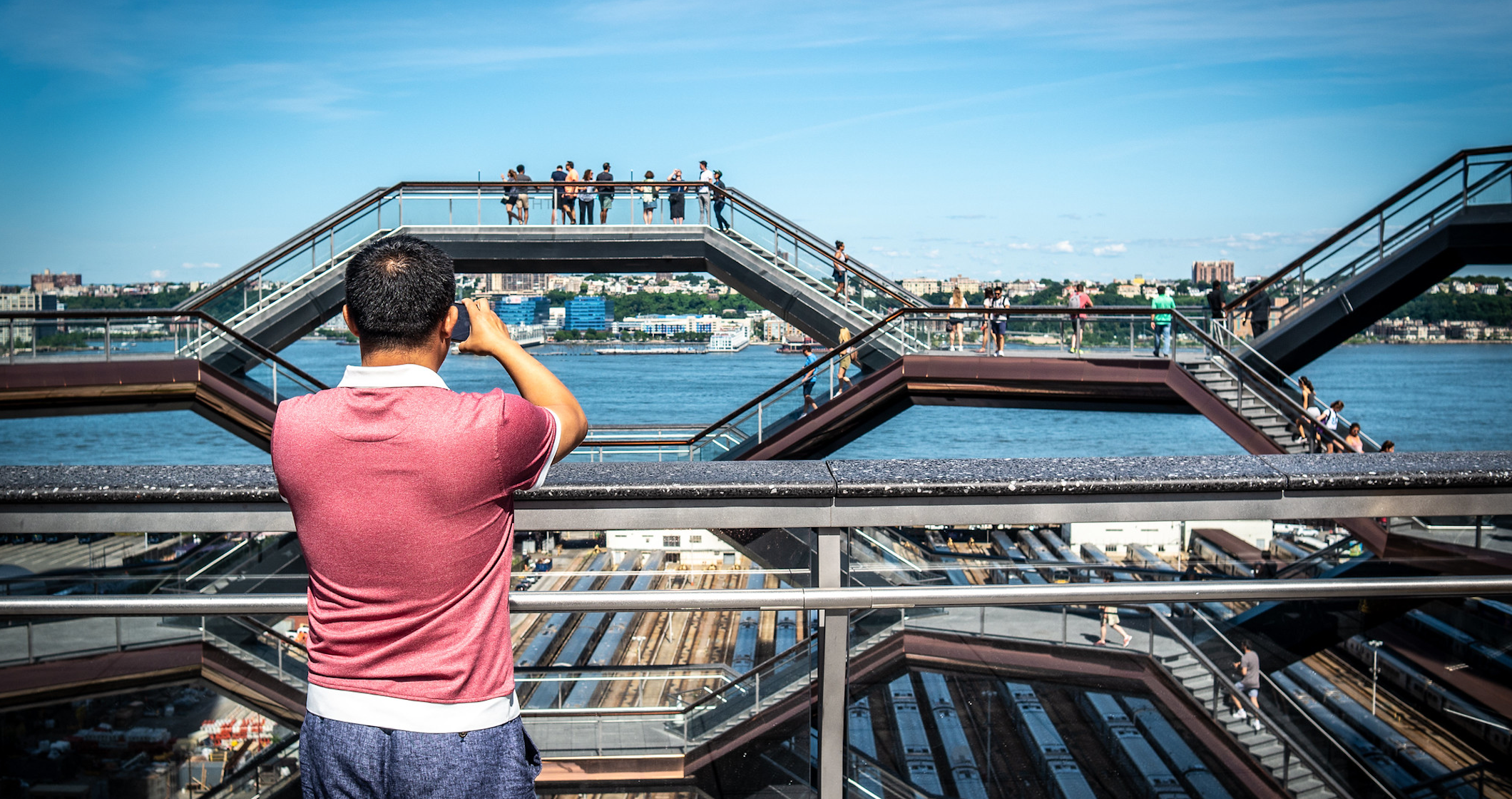 Above: The policy was updated to clarify that visitors retain ownership of their photos, but that the company can still use them for marketing and promotion (image courtesy of Phil Roeder).

Although this element of criticism is understandable, the wider outcry over the project as a whole seems unnecessarily harsh.

The Vessel and its creators are surely owed more appreciation for taking an ambitious idea and executing it beautifully, and for trying to do something that’s never been done before with a public space - creating a new cultural landmark for New York and the wider United States.

As time passes, it seems that public and professional audiences alike are finally beginning to warm to it.

With initial criticism calming down, more and more architects are now beginning to give the Vessel the credit it deserves, including a ‘Best Completed Building – Display’ award at the World Architecture Festival in December 2019.

And when a quick search on social media brings up countless happy selfies taken on the structure, it appears visitors have generally given it their approval too.

It is worth remembering that prestigious city landmarks have not always been popular from the outset. 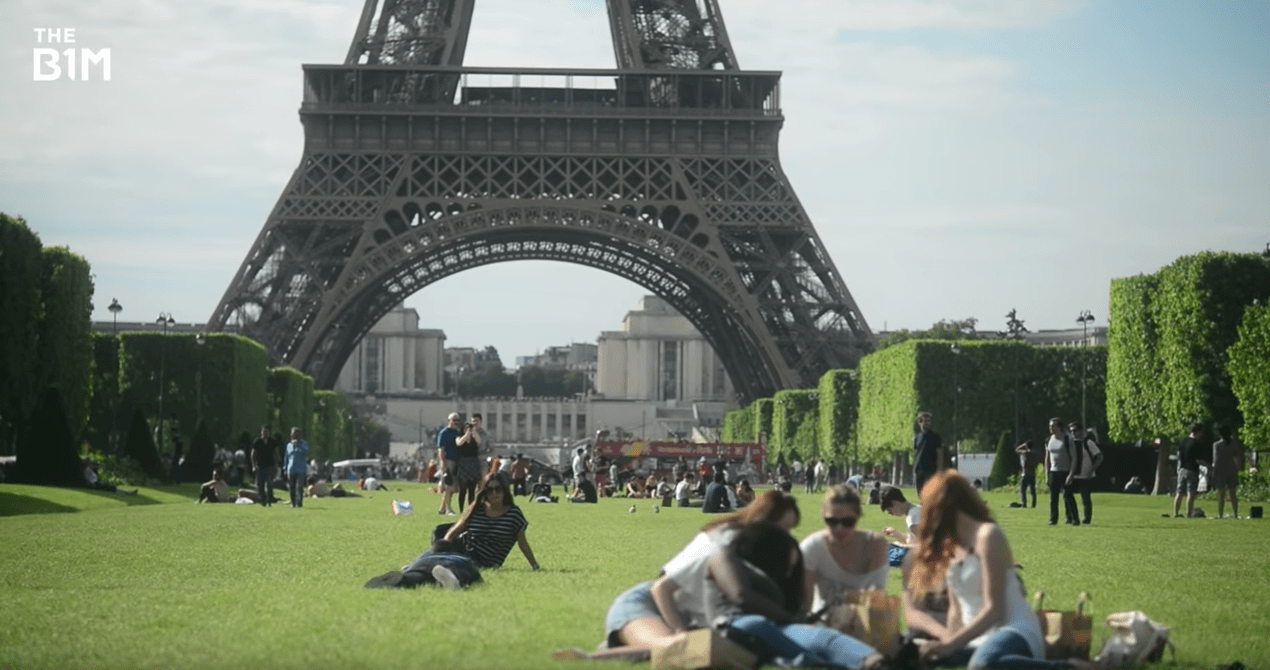 Above: Many of Paris’ citizens originally hated the Eiffel Tower, saying it didn’t fit with the rest of the city.

Even the great Sagrada Familia in Barcelona – now recognised as one of Europe’s most important architectural landmarks – was once slated by well-known figures like Pablo Picasso and George Orwell.

Perhaps the Vessel will follow a similar path. While becoming accepted into one of the world’s most iconic cityscapes and earning a place in the hearts of New Yorkers is no easy task, history will surely be kind to this remarkable project, a truly unique structure that has captured the world’s attention and put this city’s newest district on the map.

Find thousands of ready-to-use simulation templates created by SimScale's users which you can copy and modify for your own analysis - https://www.simscale.com/projects/

Discover the Community, Professional and Enterprise Plans from SimScale - https://www.simscale.com/product/pricing/