WE'RE now firmly in the age of photorealistic renders.

Never have architects been able to create such perfect visualisations of their projects before construction.

And yet, this technology comes with its dangers - and marketers eager to exaggerate angles can make buildings appear taller, greener, or more environmentally-friendly than they really are.

The temptation is only magnified in the age of social media, where a dramatic CGI image can easily make headlines around the world.

So, how accurate are renders when compared with their final reality and are we actually making huge, emotive decisions about building on misleading information? 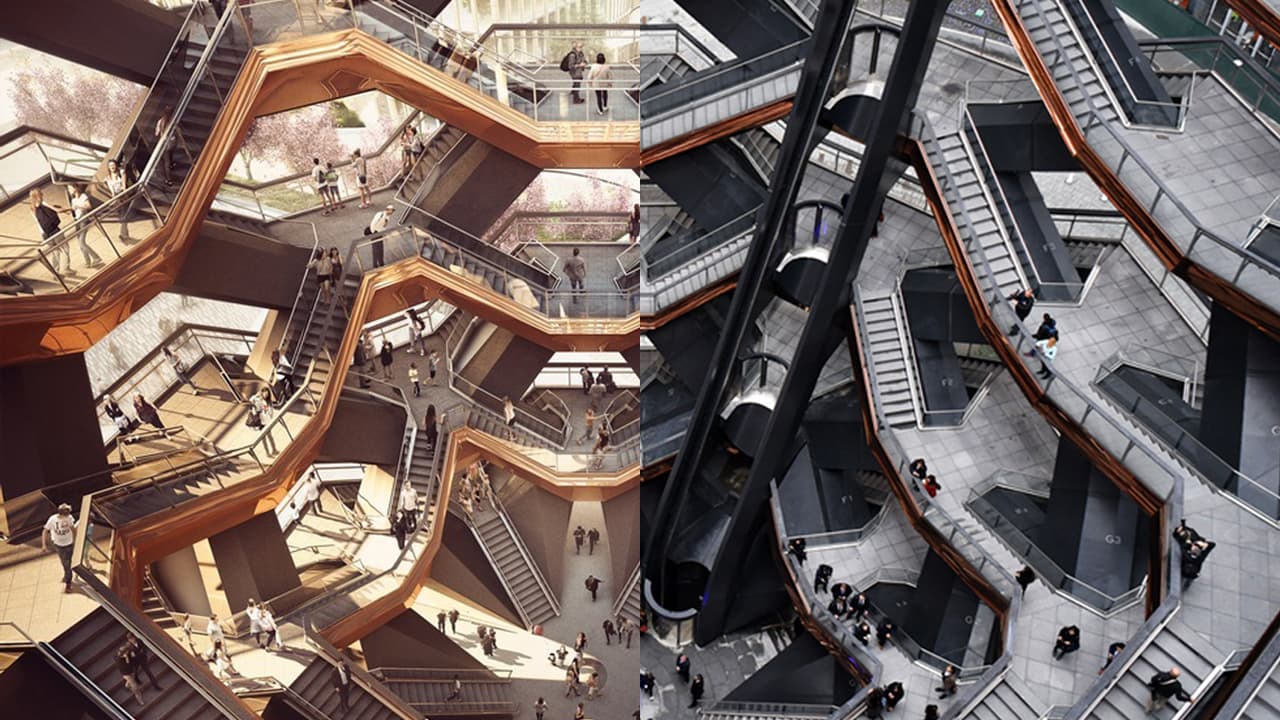 Above: A comparison of render and reality for New York's The Vessel (images courtesy of Forbes Massie Heatherwick Studio and Getty Images).

From Filippo Brunelleschi’s introduction of linear perspective in 1415 to the axonometric drawings of the Bauhaus movement in the 1920s - architects have been evolving their renders for centuries, debating the best way to present to the public and to clients a building that only exists in their imagination.

In 2020 we’ve settled on computer rendering: focusing less on the emotive response to a building - like the collages of the 1980s - and more on the physical reality of how that building will actually appear.

An emphasis on the hyper-real has led to some remarkably life-like renders.

Above: Collages were used in the 1980s to convey a more emotive sense of what a building would be like (image courtesy of Archigram).

San Francisco’s tallest new building for decades was proposing to give the city its first supertall while dramatically changing its iconic skyline, all in one of the world’s most seismically active regions. The public - and Salesforce - needed to be on board for both.

Meanwhile on the east coast, the luxury apartment tower 111W57 had to justify its price tag and show the public how elements from the historic Steinway Hall at its base would be respected and continued into the sky. 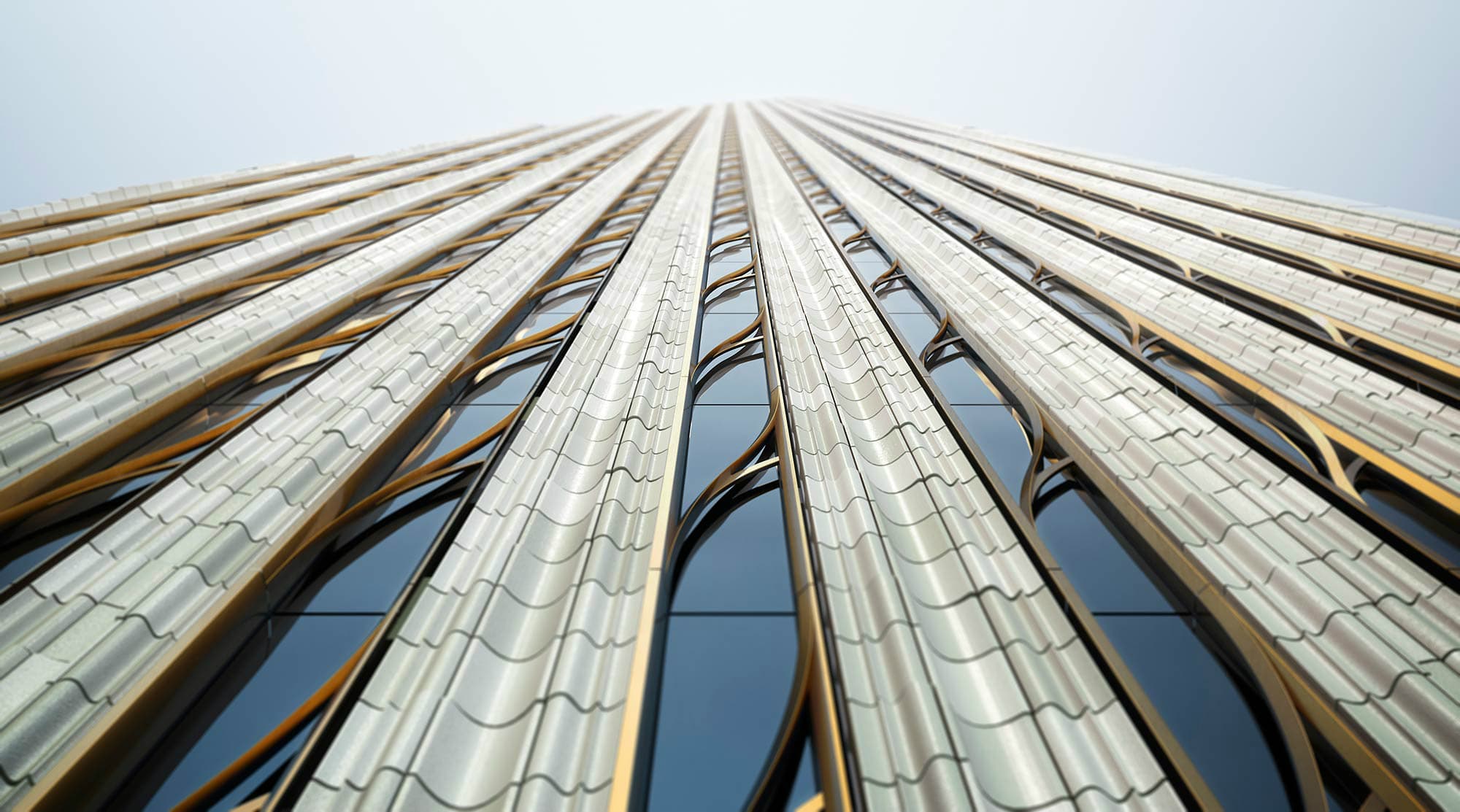 Above and below: Comparison of render and reality for 111W57 (images courtesy of SHoP Architects and Peter Murdock). 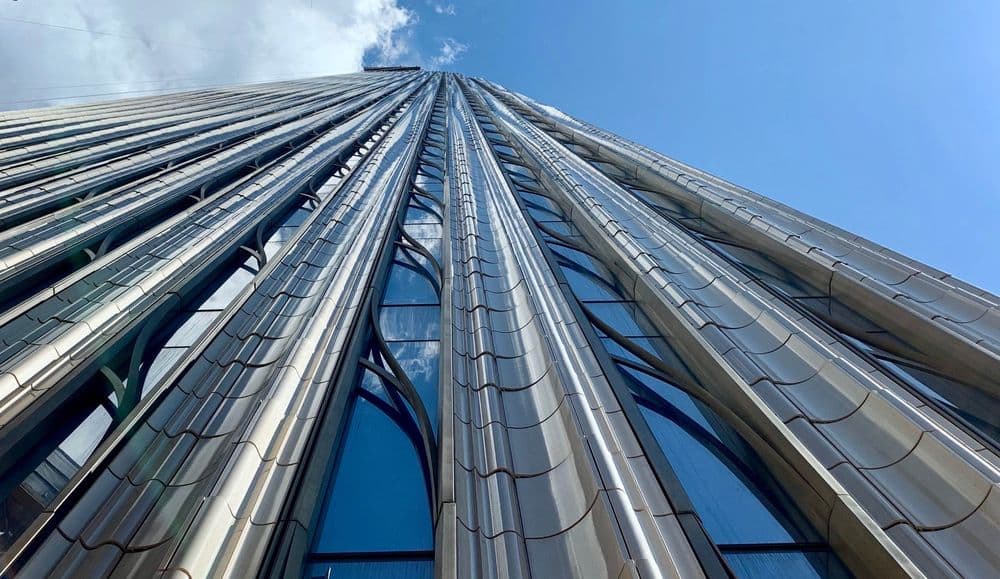 Rising above the city’s largest and oldest market - dating back to 1414 - renders needed to show how Namdaemun Tower in Seoul would respect its site’s history and breathe new life into the area.

National Kaohsiung Centre for the Arts was Taiwan’s biggest cultural investment for a generation and had many stakeholders at its design stage while Zaha Hadid’s extension to Antwerp’s Port Authority Building was so dramatic that everyone needed to understand exactly what would be happening from the outset.

Both these projects needed compelling and realistic renders. 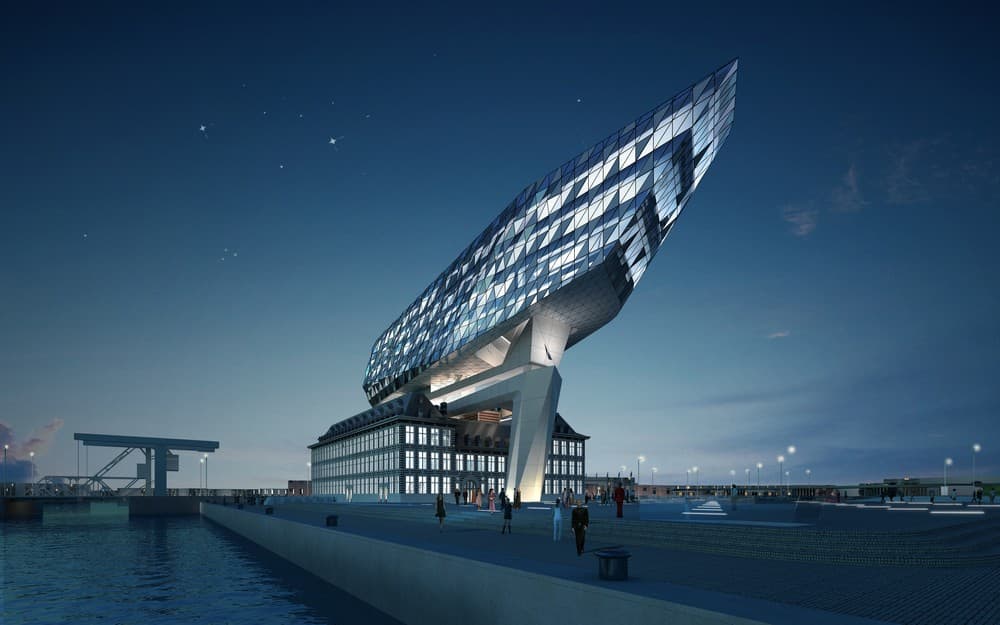 Above and below: Comparison of render and reality for the Antwerp Port House (images courtesy of Zaha Hadid Architects and Helene Binet). 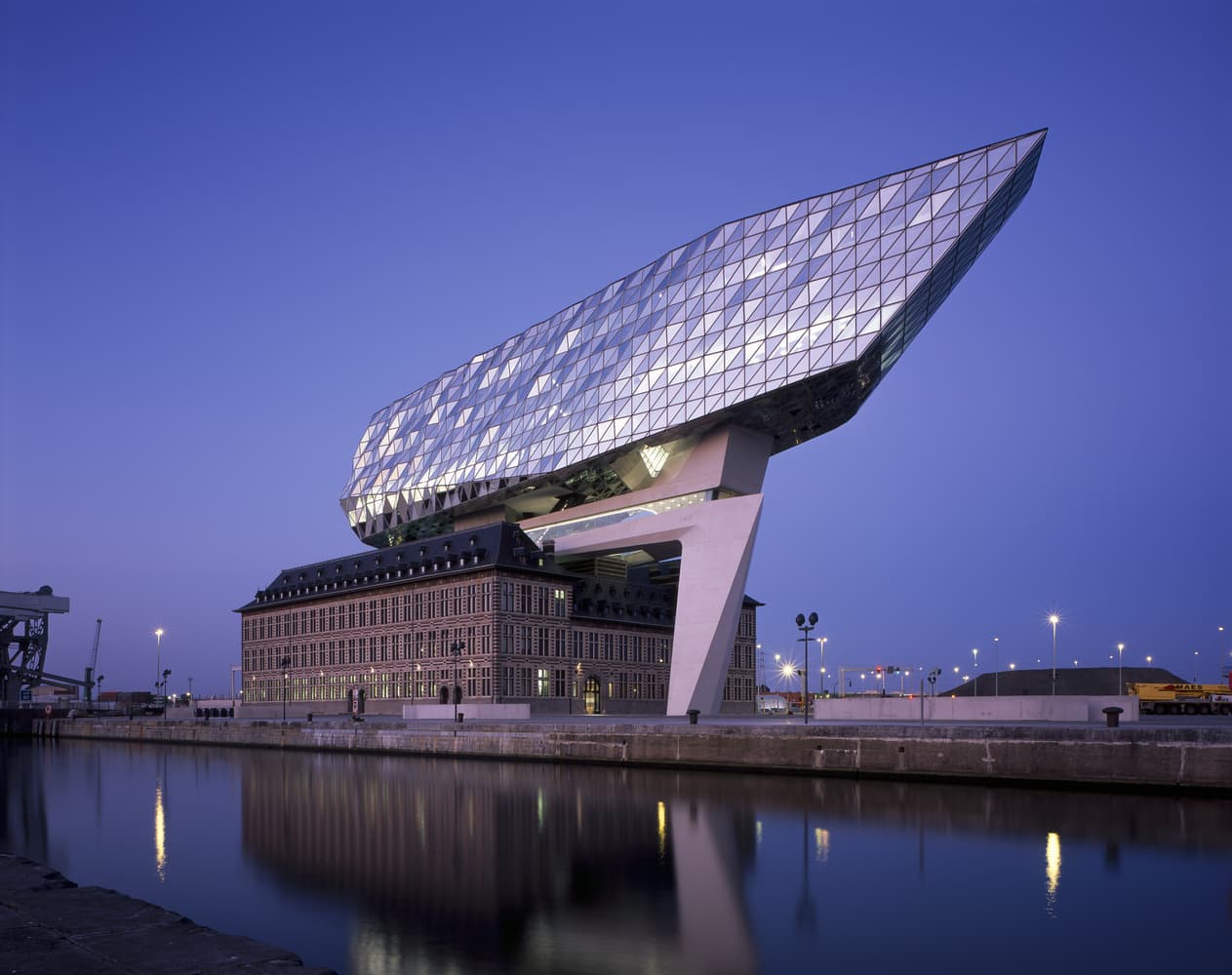 But while each of these renders show the advancements made in computer imagery, countless others have been accused of exaggeration, or have ultimately failed to live up to their real-life counterparts.

Some impressions have deliberately distorted their buildings, using tricks like a wider lens or a dramatic perspective so that a skyscraper can appear more sculptural, or taller than it actually is. 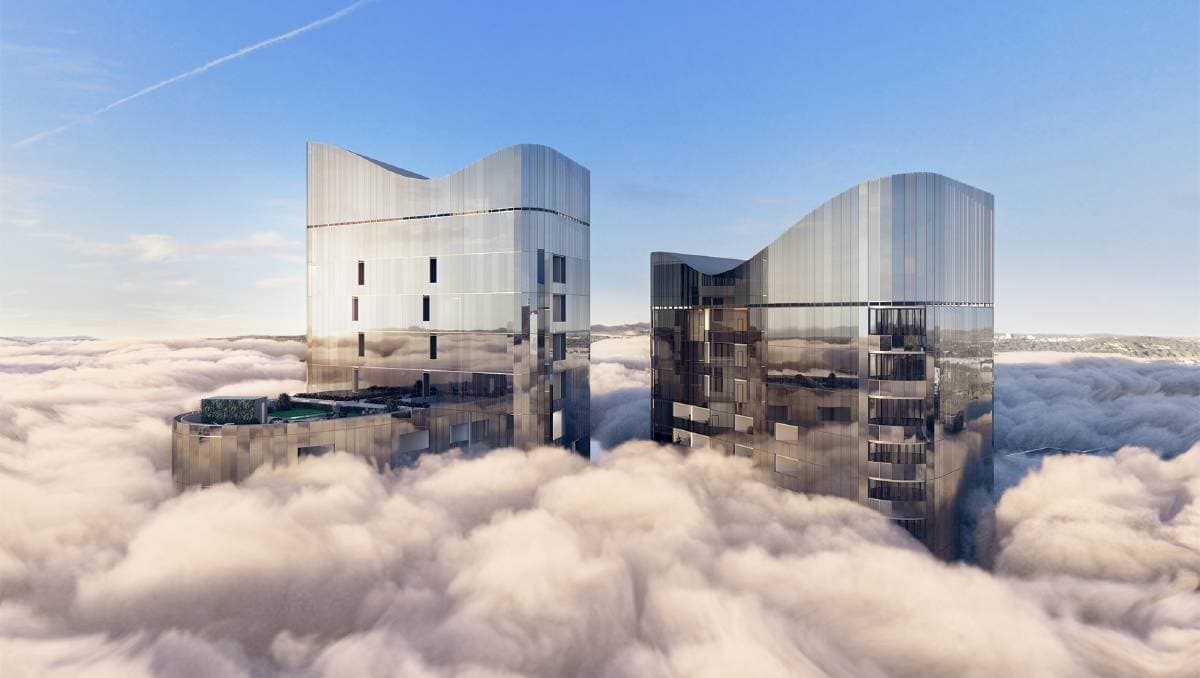 Above: Renderers often used tricks like low cloud coverage to make buildings appear far taller than they are (image courtesy of Fender Katsalidis).

In an arguably more dangerous phenomena dubbed “greenwashing” some designers have also been known to add an excess of greenery to their buildings, decorating skyscrapers with outdoor trees on every floor.

While some schemes have succeeded, in reality many of these so-called “treescrapers” would be near-impossible to create at those extents.

Additional concrete and steel reinforcement are required to handle the extra weight of trees, while irrigation systems are needed to water the plants.

Harsh winds at those heights can strip trees of their leaves and interrupt their photosynthetic processes.

Above: Skyscrapers are often depicted covered in tress when that practically is not possible (image courtesy of Büro Ole Scheeren).

The people appearing in renders has also been a point of contention.

Some critics have called-out a lack of diversity - or painful diversity box-ticking - while others have pointed to unrealistic depictions meant solely to sell a building.

Ultimately the judgement on where the line between render and reality is drawn sits with those creating these images, the information they are briefed with and the demands of their clients.

Some will use outstanding technology tools to make their ideas startlingly tangible, while others will create their own reality.

That’s not the fault of the technology, which is developed to create images that are as true to real-life as possible - but of the people using it.

As architectural renders only get more realistic there are certain tricks of the trade to be mindful of - and it’s important to remember that a render isn’t reality, no matter how close it looks.