ONE of the built environment’s most basic functions is to protect us from weather and changeable climates throughout the year. Many buildings around the world achieve this in the face of some pretty extreme forces of nature, but building a research station in Antarctica is perhaps the toughest challenge of all. So how is it done?

Antarctica is the world’s coldest, driest and windiest continent. Despite being almost twice the size of Australia, it is also the least populated with only around 135 permanent residents.

The environment is home to several scientific research stations, including a British base at Halley Bay, named after the astrologer Edmond Halley. The base sits on the Brunt Ice Shelf; a 150 metre thick slab of ice that is steadily moving 400 meters closer to the sea each year. Once ice reaches the edge of the shelf, it calves off into the ocean creating icebergs. 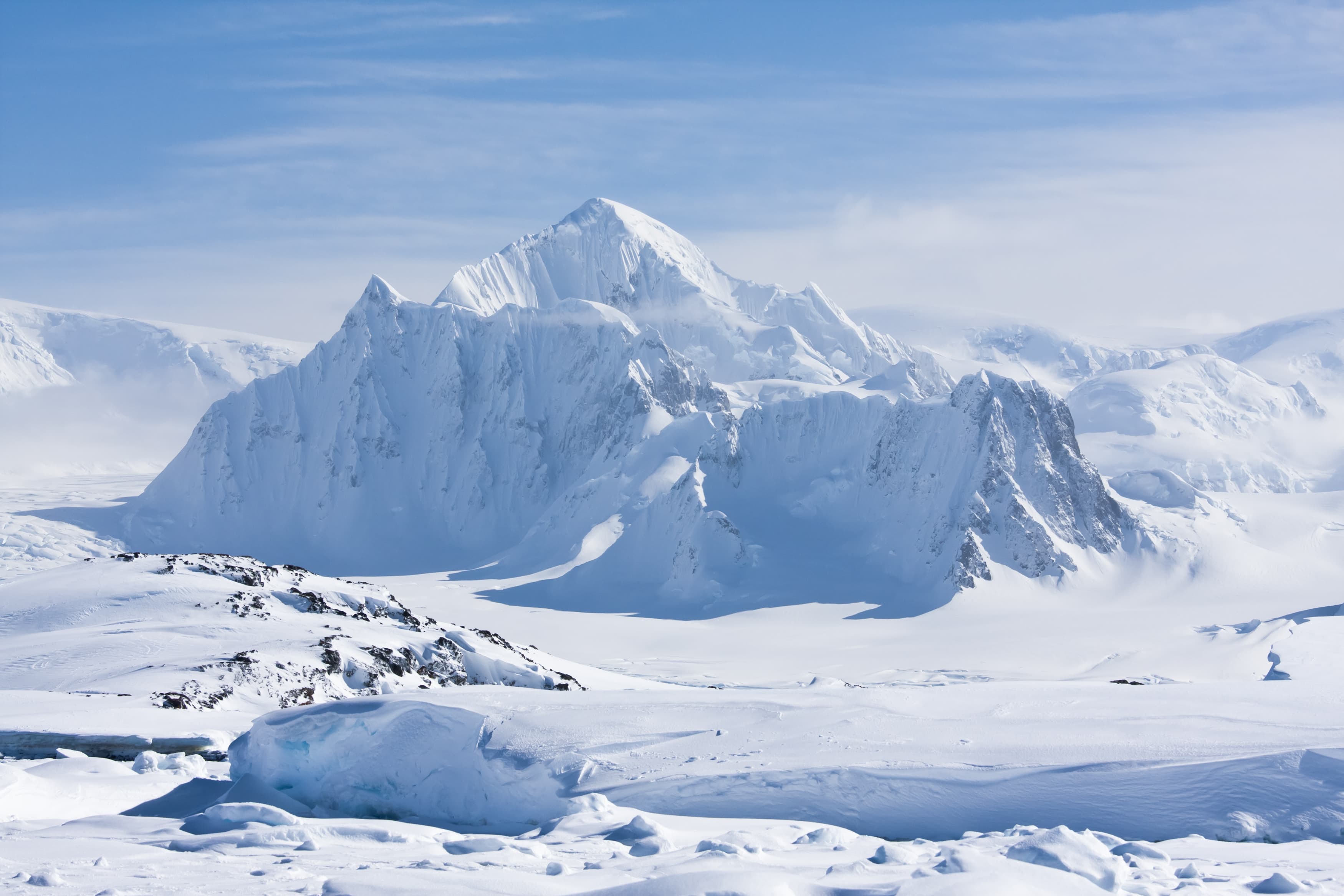 Above: Antarctica is the coldest, driest and windiest continent on earth. Below: Part of the Brunt Ice Shelf where its meets the Weddell Sea (image courtesy of British Antarctic Survey). 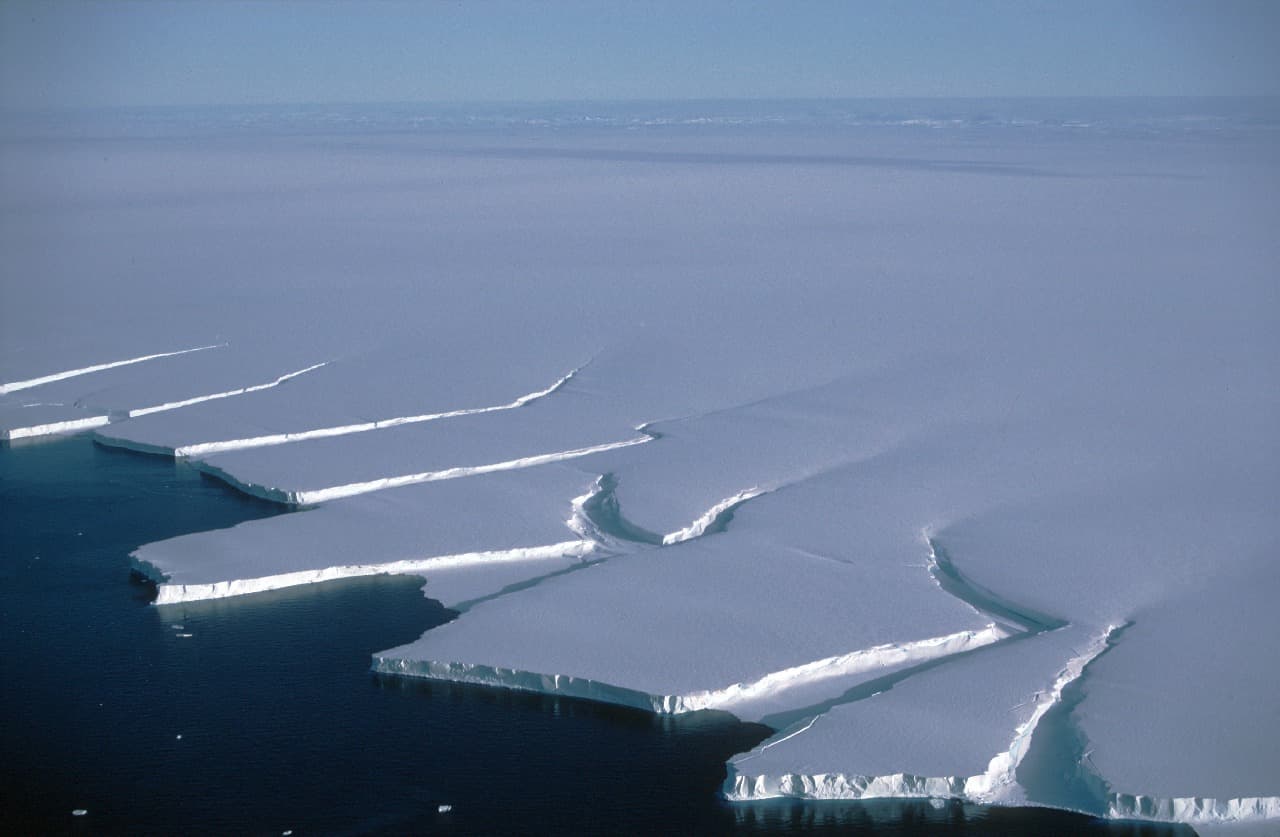 Temperatures at Halley average -10 degrees Celsius in the summer months and -20 in the winter. Temperatures as low as -56 Celsius have been known.

Summer lasts for a mere three months and provides a window for aircraft and ships to bring materials, supplies and personnel to and from the remote location. By contrast, the winters here last for nine months and include 105 days of total darkness where the sun does not rise at all.

Since 1957, the British have continually occupied a research station at Halley, albeit in several different guises as building technologies and research capabilities have progressed. Several previous bases were crushed by snow build-up and the last facility had moved to an area near the edge of the ice shelf that was at risk of calving into the ocean.

Hugh Broughton Architects and AECOM won a competition to design the latest iteration of the station, named Halley the Sixth.

The facility is formed of several modular components arranged in a straight line that sits perpendicular to the prevailing wind. This layout causes snow drifts to form on the leeward side, leaving the windward side free from drifts and reducing snow management requirements. It also acts to create a solid ice surface for vehicles to manoeuvre on. 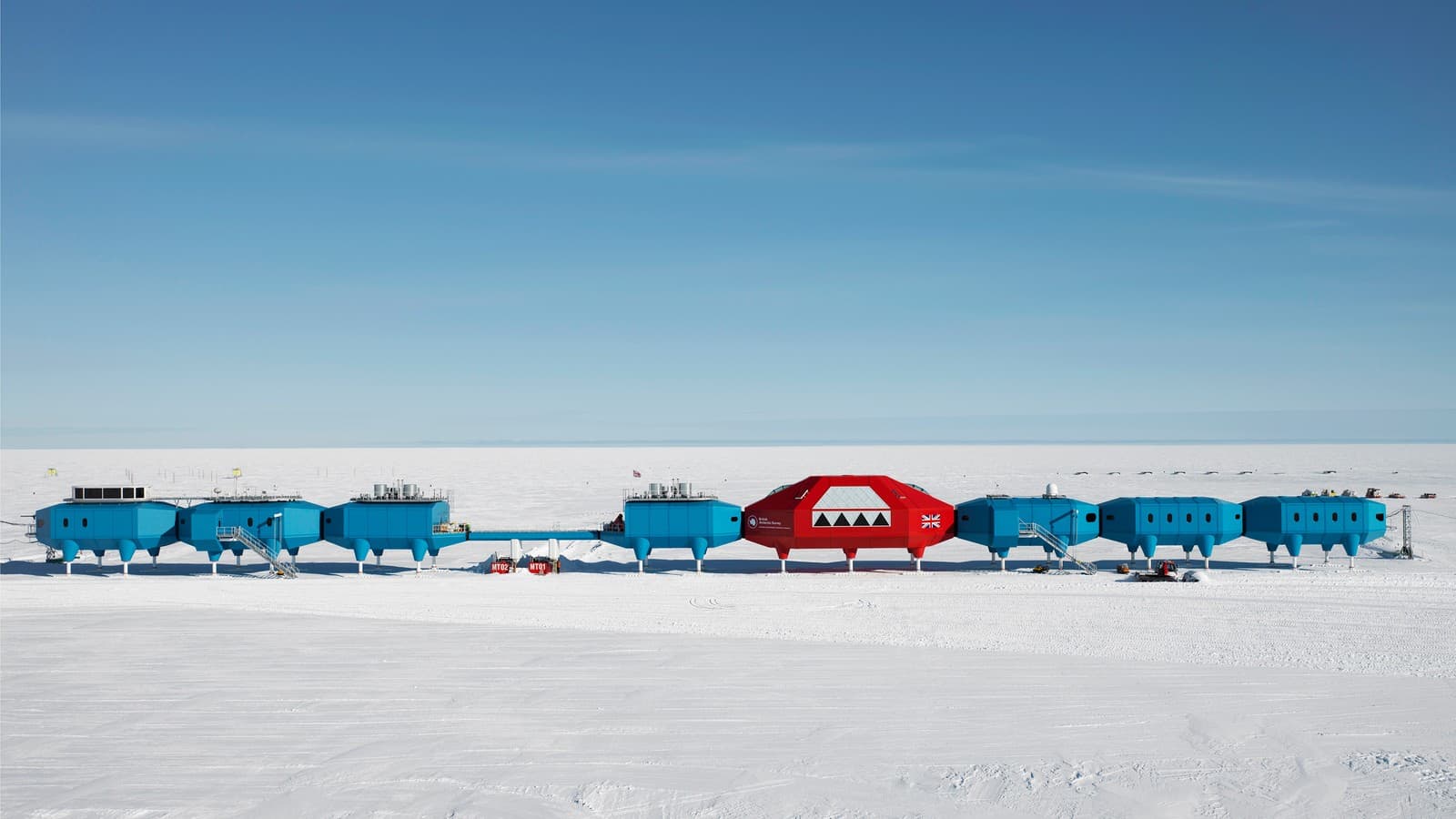 Above: The station's modules sit in a linear formation, perpendicular to the prevailing wind (image courtesy of James Morris)

The general build-up of snow was an important factor to consider during the design process, having been the undoing of several earlier bases. Snow levels on the Brunt Ice Shelf rise by an average of one metre each year.

To address this, the station’s modules are supported on large steel skis and hydraulically driven legs that enable it to mechanically climb out of the snow every year. As the structure moves closer to the edge of the shelf over time, the modules can be lowered and towed by bulldozers to a new position further inland. 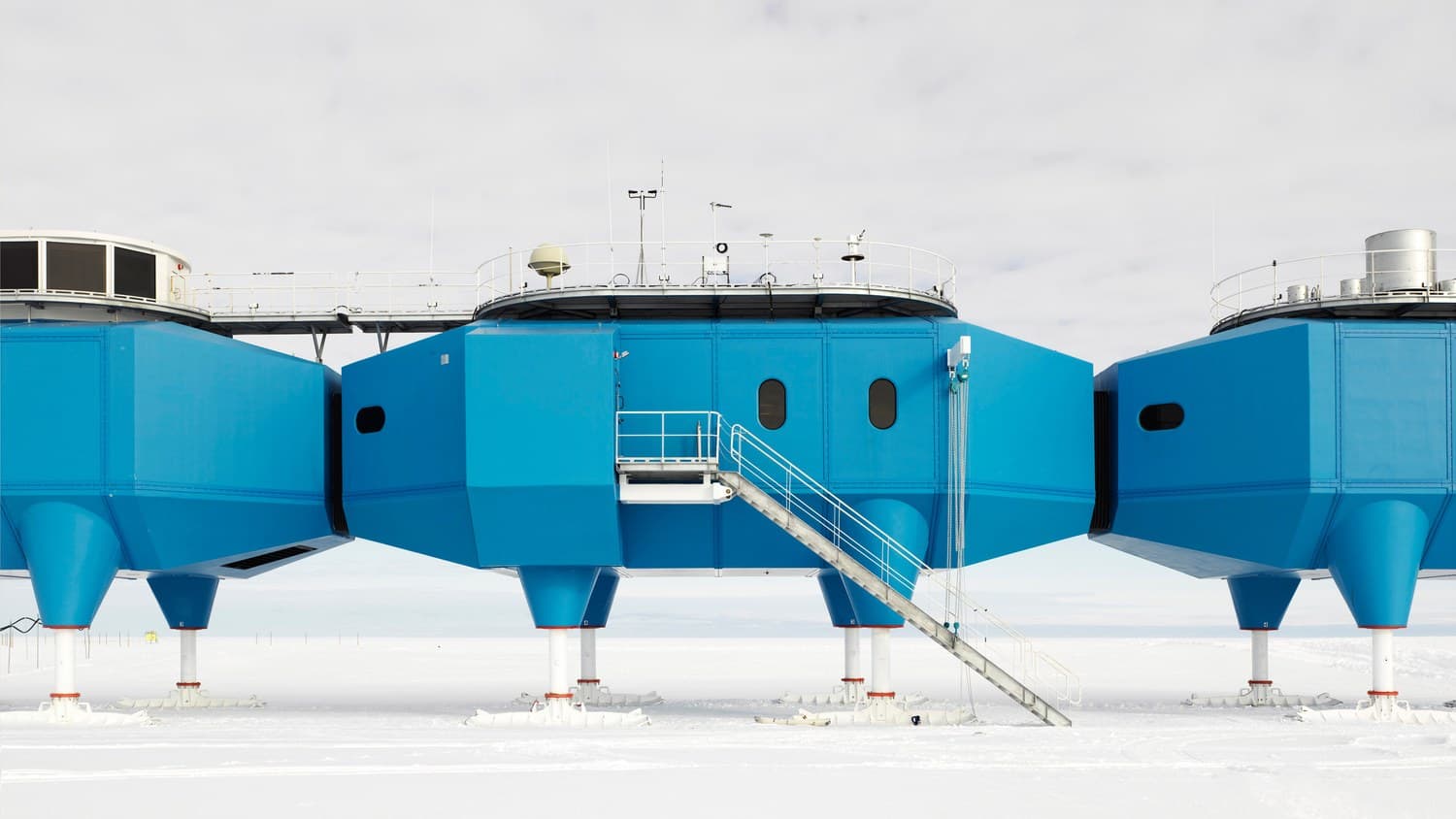 Research labs, accommodation and energy centres are housed in the station’s blue modules, whilst a large red module in the centre is used for dining and social activities. The base is split into two independent parts for life safety. Each has its own energy centre and is self-sustaining in case of emergency.

The station is a microscopic self-supporting and infrastructure-free community. Its home to a team of 52 people in those brief summer months and a mere 16 people in the winter. Those enduring the winters are highly prone to developing Seasonal Affected Disorder (SAD) and steps have been taken to create an uplifting interior design that combats this condition. 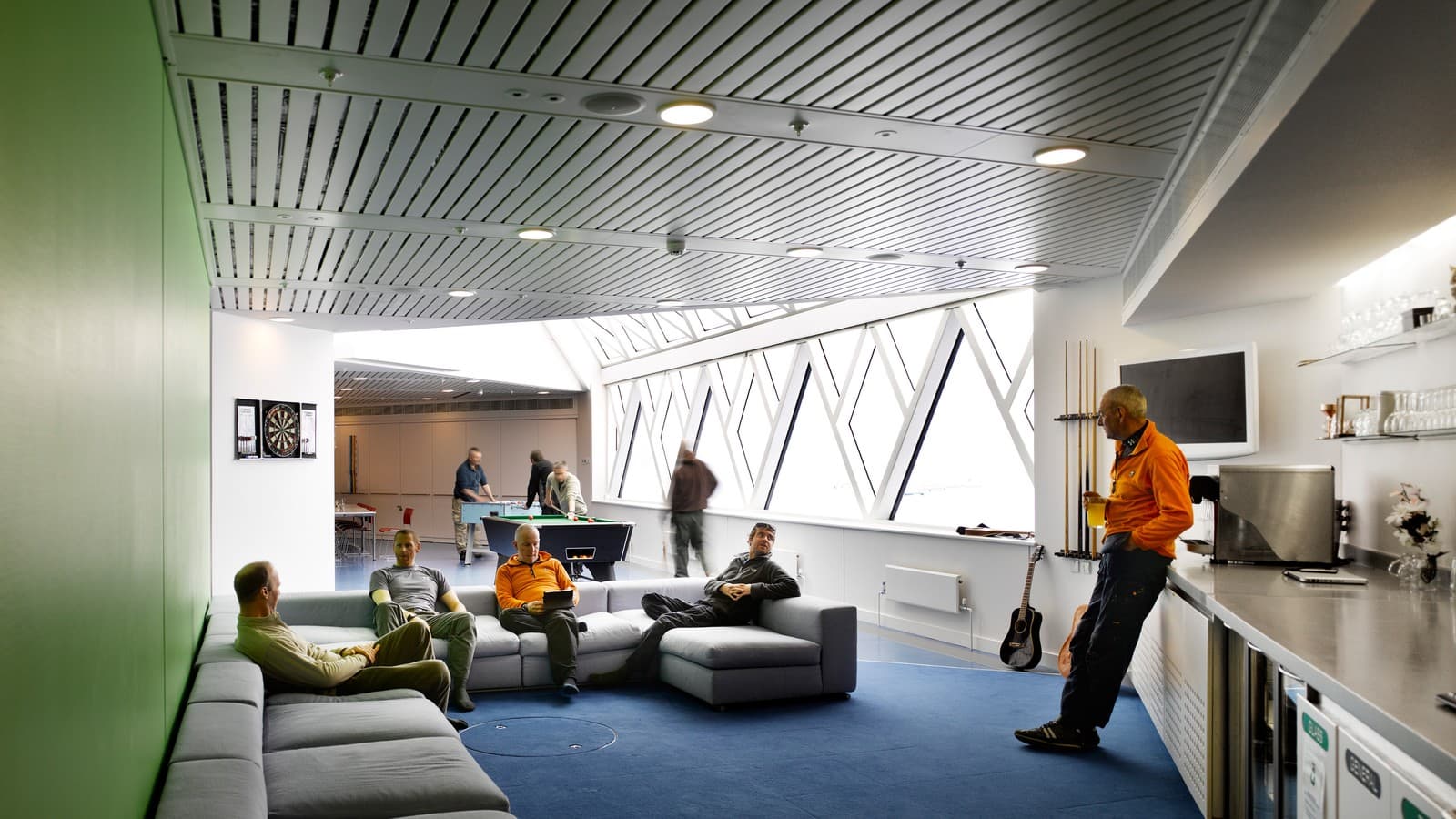 Above: The station's red module provides social space for those living on site (image courtesy of James Morris).

BUILDING AT THE END OF THE EARTH

As you might imagine, constructing the new research station was far from easy. On top of the extreme climate, the construction team led by Galliford Try had to ensure that the Environmental Protocols of the Antarctic Treaty were met throughout their works.

To overcome the factors of climate and environmental legislation, the modules were pre-fabricated off-site. Each unit, formed of a steel structure with highly insulated GRP panels, was first test-assembled in South Africa before being taken to Antarctica on an ice-strengthened ship. 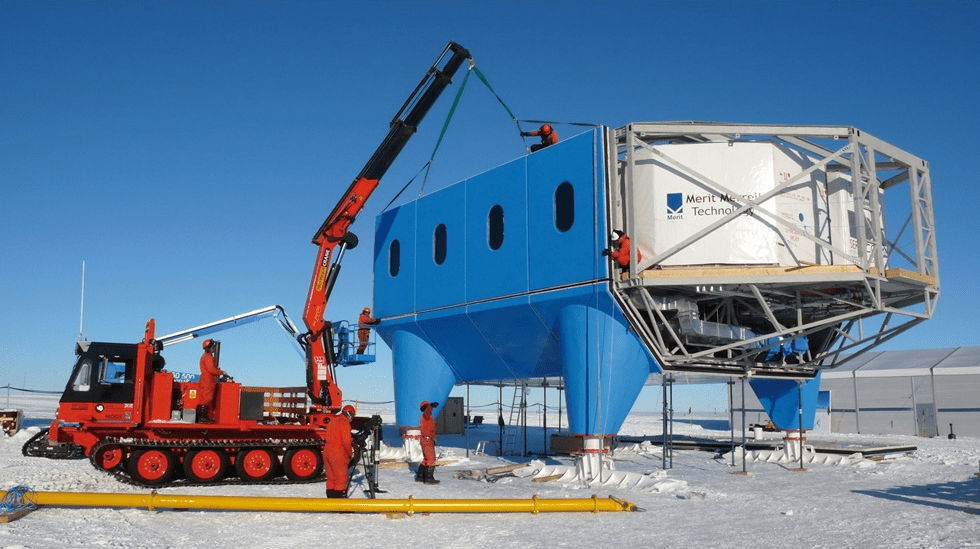 Above: A module being assembled at the site of Halley the Fifth, prior to be towed inland to the new site (image courtesy of Andy Cheatle).

Once there, the modules and other materials were unloaded onto the fragile sea ice around the base of the shelf (ice with a maximum bearing capacity of just 9.5 metric tonnes). They were then towed on sledges up a series of natural and man-made ramps to the top of the ice shelf some 20 meters above.

The new station was constructed over three summers using a factory line approach at the site of the Halley the Fifth base, where the construction teams were housed. Once assembled, the modules were taken by sledge to the new Halley the Sixth site 15 kilometres inland, effectively validating the relocation strategy. The new station entered full operation in 2013 and is expected to endure several decades of service in this extreme location. 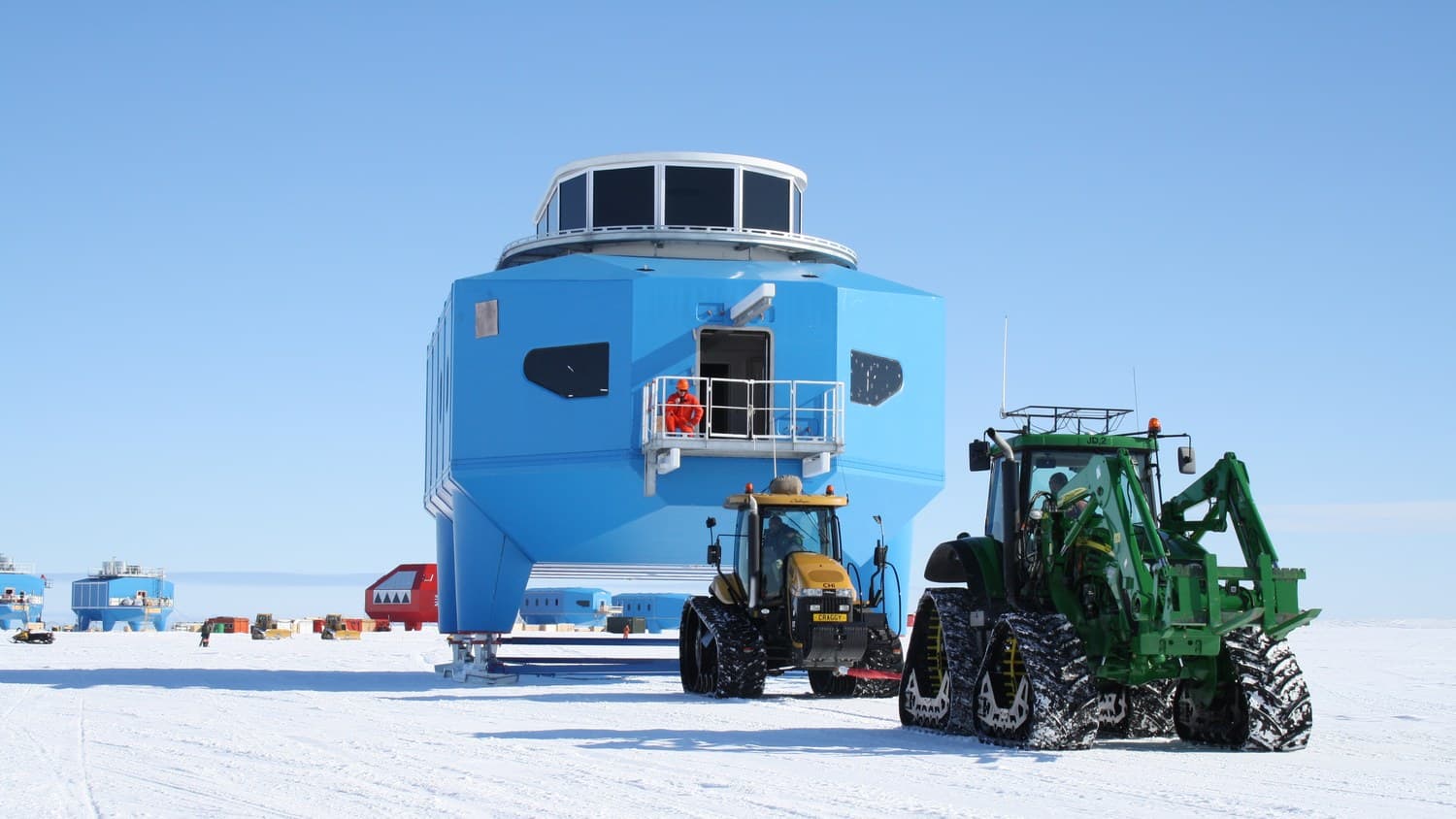 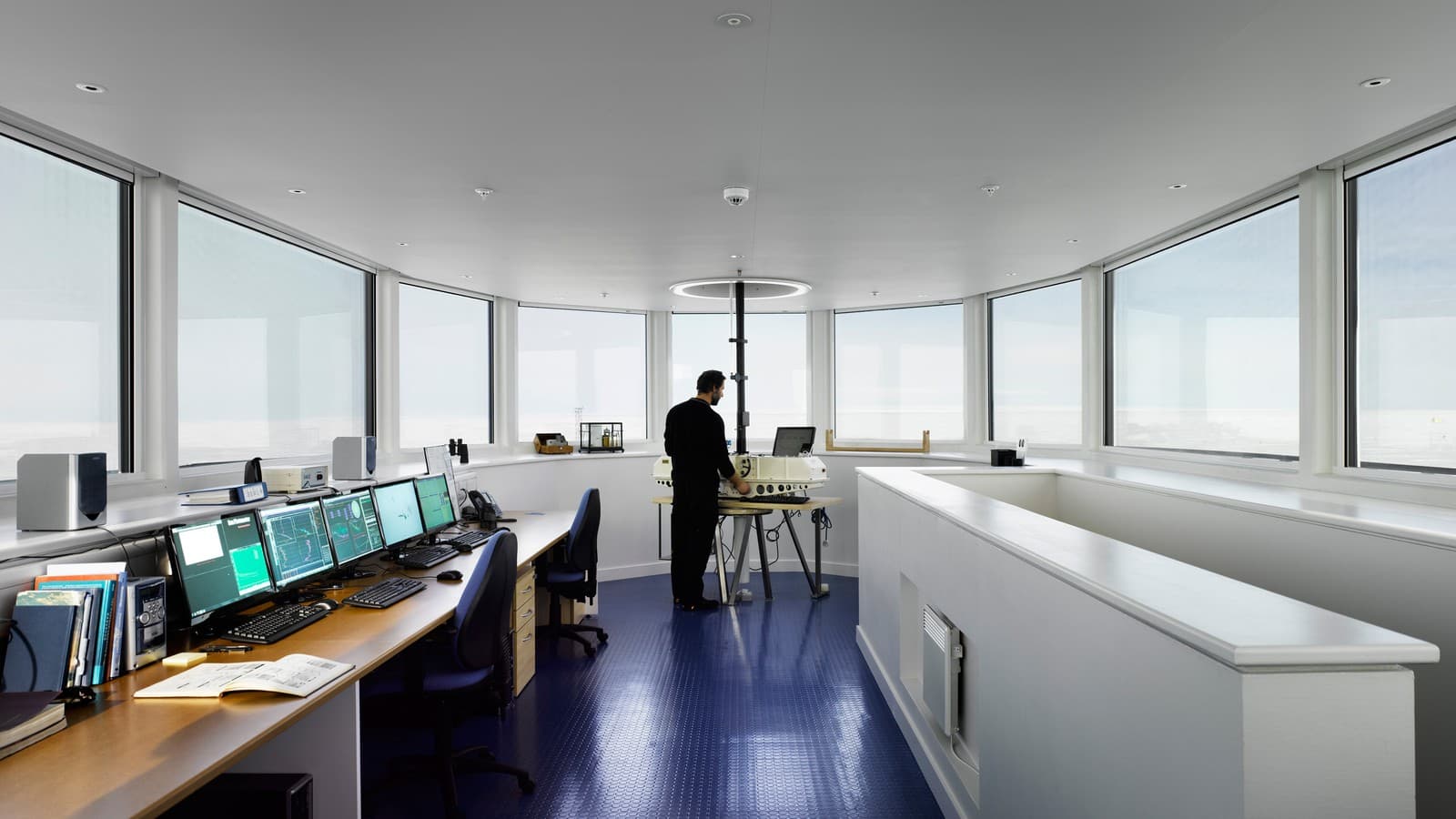 You can learn more about the Halley VI Research Station and the work of the British Antarctic Survey here, including the current relocation project.